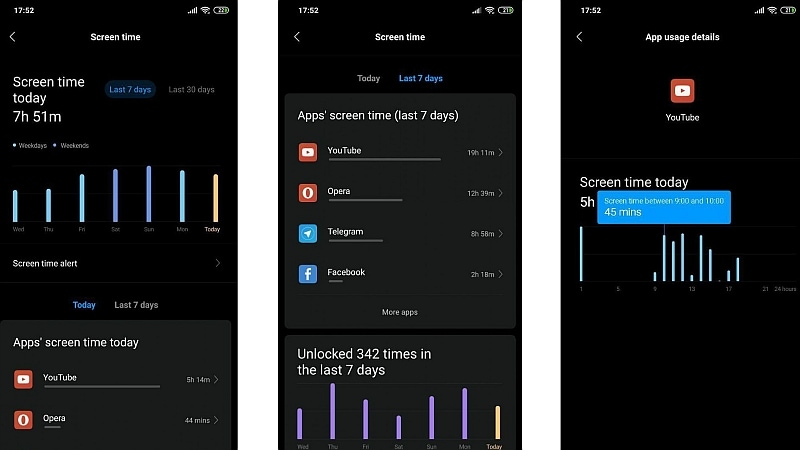 Xiaomi has reportedly added a "Screen Time" feature to its latest MIUI Global Beta build. The new feature appears similar to the Digital Wellbeing feature that Google announced at its I/O developer conference last year. It essentially highlights for how long you have looked at the display of the phone. Similar to Google's Digital Wellbeing, the Screen Time feature on MIUI lists all the app that you have used throughout the day. The feature also enables alerts that can be set for weekdays and weekends to curb your device addiction. Also spotted in a recent MIUI beta update was a Wi-Fi probe protection feature.

According to a report by XDA Developers, the latest MIUI Global closed beta version released this week has brought the Screen Time to Xiaomi phones. The feature apparently sits under the Settings menu -- to be precise, within the System Settings. The feature was spotted on Mi 8 SE running MIUI 10 beta v9.4.15.

The Screen Time feature additionally has the ability to set a screen time limit for weekdays and weekends. It will alert you once you cross the limit.

Xiaomi hasn't announced the Screen Time feature publicly. However, it is expected to reach all the MIUI Global Beta users later this week, and stable users in a future update.

Separately, XDA reports that a Wi-Fi probe protection feature has been spotted on MIUI beta builds (both Android 8.1 Oreo and Android 9 Pie based). The feature was reportedly tested during the Android P Developer Preview stage, and aims to prevent users from being tracked via their MAC addresses by protecting the data transferred from or to devices over a Wi-Fi connection. The feature is said to randomise the smartphone's MAC address "so that the actual address is not shared with the WLAN router with a probe frame."

To recall, Google brought its Digital Wellbeing last year to help users improve their digital habits and limit their device addiction. The feature works on devices running Android 9.0 Pie and requires a dedicated app to enable the new experience.