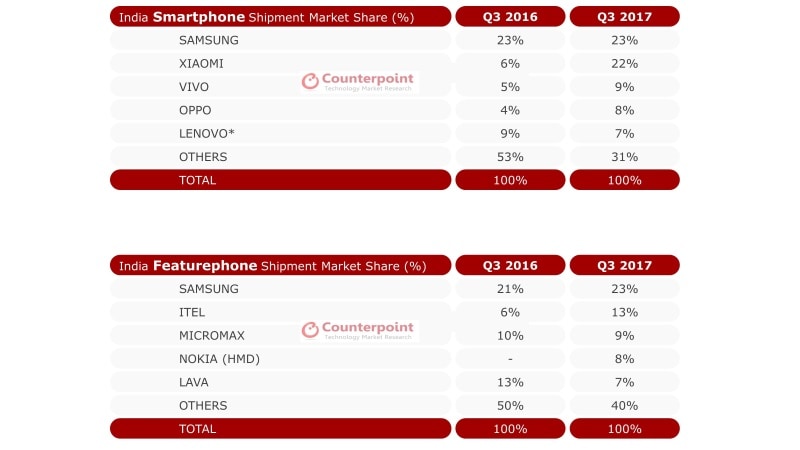 Samsung and Xiaomi together contributed to 45 percent of the smartphone market in India in the third quarter of this year as the market grew 37 percent (quarter on quarter) and 18 percent (year on year), temporarily surpassing the US for the first time ever - echoing similar results from Canalys.

According to the latest research from Counterpoint's 'Market Monitor service', India handset shipments reached an all-time high of over 84 million for the first time ever, driven by strong sale of both feature phones and smartphones.

"This is the first time since 2012 that Samsung and Xiaomi have reached this level of combined share. Additionally, the quarter was marked with return to growth for local handset players such as Micromax and Lava in the smartphone segment," said Karn Chauhan, Research Analyst at Counterpoint Research.

Chinese brands performance remained strong and contributed to more than half of the total smartphone shipments.

It is the third consecutive quarter when their market share is well over 50 percent after they took over local players in the second half of 2016.

However, local brands like Micromax and Lava grew 41 percent and 24 percent (QoQ), respectively, in the smartphone segment recovering from their all-time low during demonetisation last year.

Xiaomi, iTel, Oppo, Vivo, and OnePlus were the fastest growing smartphone brands during the third quarter driven by festive sales.

Featurephone segment declined 4 percent (YoY) but grew 22 percent (QoQ) driven by sub-Rs. 1,000 devices as well as entry of Jio Phone and Nokia branded phones in the market during the quarter.

"It has been almost a year since Reliance Jio launched its 4G LTE network officially, which drove an inflection point for mobile data consumption as well as demand for 4G capable phones," said Shobhit Srivastava, Research Analyst at Counterpoint.

Three out of four mobile handsets shipped were made in India during the third quarter.

Affordable mid-end segment (Rs. 10,000 - Rs. 15,000) was the fastest growing segment driven by strong performance of Xiaomi which contributed to almost half of the shipments.

"Three out of the top five bestselling smartphones in India were from Xiaomi alone. Xiaomi has been popular in the past for its value for money offerings," said Counterpoint Associate Director Tarun Pathak.

Premium segment (above Rs. 30,000) grew record three times (YoY) during the third quarter owing to the strong performance of Apple, OnePlus, and Samsung.

Qualcomm was the leader among smartphone chipset suppliers.