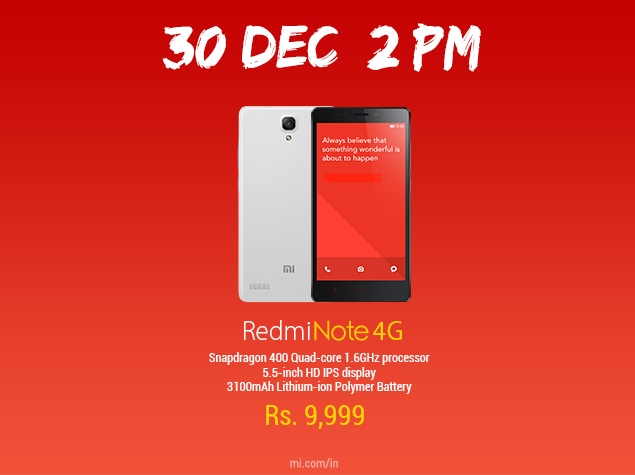 Xiaomi on Tuesday has finally announced the availability of the Redmi Note 4G in India. Priced at Rs. 9,999, the Redmi Note 4G will be available through Flipkart flash sale on December 30 at 2pm IST, though the company hasn't detailed the number of units that will be up for purchase.

The registrations for the flash sale of Xiaomi Redmi Note 4G will begin from Tuesday 6pm IST via Flipkart.

Last month, Xiaomi in India had launched the two variants of Redmi Note, the Redmi Note at Rs. 8,999 and the Redmi Note 4G at Rs. 9,999. Till date, only the MediaTek-based 3G variant had gone up for sale, while the Qualcomm-based 4G variant was scheduled to become available in the second-half of December.

However, the Xiaomi has been temporarily banned from selling handsets in India not powered by Qualcomm chipsets, as they are alleged to infringe on Ericsson's patents. The Swedish firm had earlier this month moved the Delhi High Court to pass an injunction order that banned import and sales of Xiaomi handsets until patent issues were resolved, but Xiaomi scored a reprieve last week, and this week held it's first flash sale again, with the Qualcomm-based Redmi 1S.

Featuring single-SIM support, the Xiaomi Redmi Note 4G runs on Android 4.4.2 KitKat OS with MIUI v5 skin on top. During the launch in India, Xiaomi had indicated that updates to Android 5 Lollipop will be available in the future, but there is no time frame.

The smartphone is powered by a quad-core 1.6GHz Qualcomm Snapdragon 400 CPU coupled with 2GB of RAM. Other specifications of the Xiaomi Redmi Note 4G are similar to the Redmi Note (3G), which includes a 5.5-inch 720x1280-pixel IPS LCD display; a 13-megapixel rear autofocus camera with LED flash; a 5-megapixel front-facing camera; 8GB built-in storage with microSD card expansion (up to 64GB), and a 3,100mAh battery with support for fast charging.
Affiliate links may be automatically generated - see our ethics statement for details.