Xiaomi Redmi Note 4G to Be Available Without Registration From Thursday 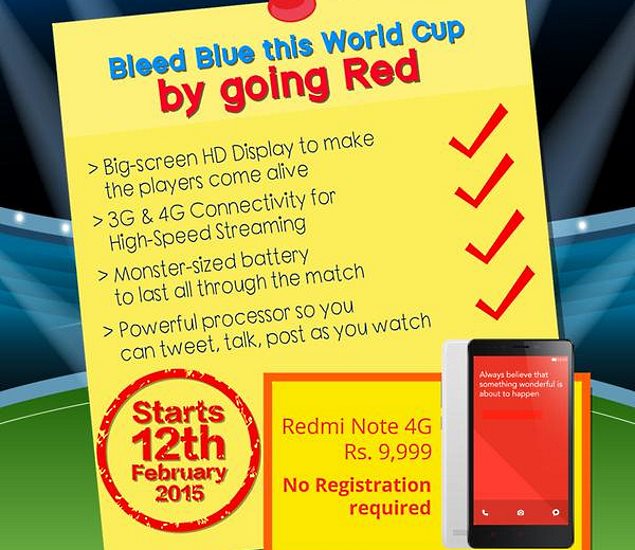 Xiaomi on Thursday announced that the Redmi Note 4G in India will not be sold using its flash sale model, and that customers can buy the smartphone without registration from Thursday.

The Chinese company took to its official Mi India Facebook and Twitter accounts to make the big announcement.

On Twitter the company wrote, "From Feb 12th, you can purchase your #RedmiNote4G any time you want with @Flipkart, just in time to catch #CWC15."

On Facebook, it noted, "Good news! We now have sufficient stock of Redmi Note 4G for all Mi fans and you can purchase yours any time you want from Flipkart, just in time to catch the ICC Cricket World Cup."

As yet, the Flipkart's Redmi Note 4G page hasn't yet started selling the device, but we are expecting it to go live soon.

To remind you, the Xiaomi Redmi Note 4G is priced at Rs. 9,999. Xiaomi has been following the flash sale model for online sales of the device in India, and offline sales model via exclusive Airtel stores.

Earlier this week, Xiaomi had made 40,000 units of the Redmi Note 4G available for purchase, but did not announce how long it took for the phones to go out on stock.

For its February 3 sale, the company had made 60,000 smartphones available to purchase, but once again did not reveal how fast they were snapped up by customers.

For its January 20 flash sale, once again 60,000 units of the Xiaomi Redmi Note 4G had gone on sale; however Xiaomi did not reveal the exact amount of time taken for the inventory to go out of stock.

Last last month, Xiaomi announced that the Redmi Note 4G smartphone will go on sale over the Republic Day weekend (from January 24 to January 26) without registration. The company however did not announce exactly how many units were available to buy in the open sale.

With the past few flash and open sales, it is becoming clear that the Redmi Note 4G is not very much in demand, but it appears that did not stop Xiaomi from importing a large number of the handsets into the country. It is no wonder then the company now says it has "sufficient stock" of the smartphone.