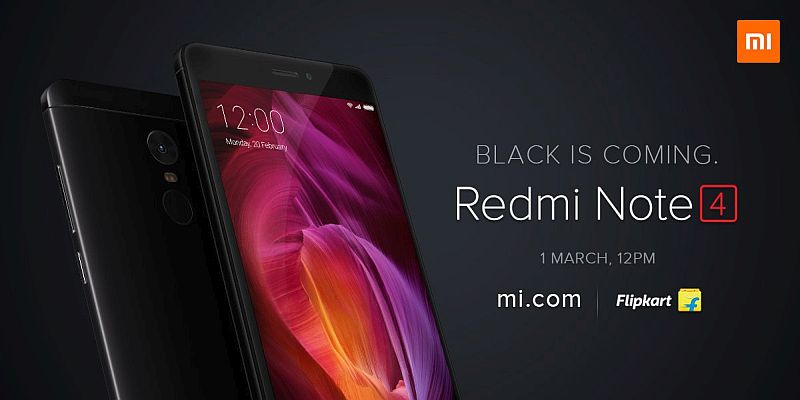 Xiaomi last week had revealed the Matte Black colour variant of the popular Redmi Note 4 smartphone will go on sale in India on Wednesday, March 1. The new Xiaomi Redmi Note 4 colour variant will be available to buy via Flipkart and Mi.com from 12pm IST.

So far, the Xiaomi Redmi Note 4 (Review) has been available to purchase in Gold, Grey, and Silver colour variants in India. To recall, Xiaomi had launched the Redmi Note 4 in India back in January, and the smartphone went up on its first sale a few days later. While the smartphone was unveiled in three RAM/ storage combinations in India, the 2GB RAM/ 32GB inbuilt storage model only went on sale in February.

Some of the highlights of the Redmi Note 4 are a metal unibody, processor performance, and improved camera compared to the Redmi Note 3. To refresh on the specifications, the Xiaomi Redmi Note 4 has a 5.5-inch full-HD display, and is powered by the Snapdragon 625 SoC. At the rear, there is a 13-megapixel camera sensor with dual-LED flash and a fingerprint sensor. In the front, the smartphone houses a 5-megapixel sensor. It sports a large 4100mAh battery, supports VoLTE, and runs on MIUI 8 based Android 6.0 Marshmallow.