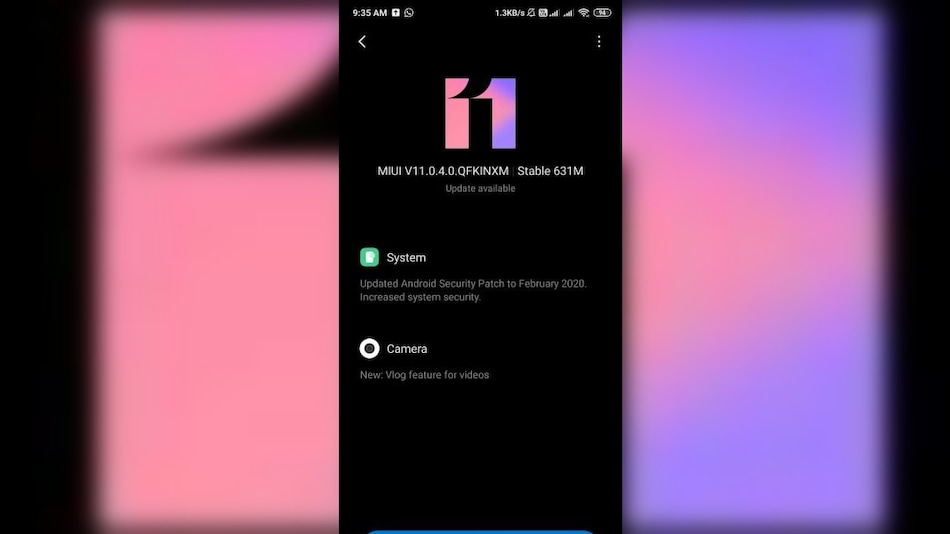 Xiaomi has begun the rollout a new software update for the Redmi K20 Pro in India via the stable channel, as per user reports. The update brings the February Android security patch to the Redmi flagship in India. However, it is over a month late since Google has already released the March security patch for its Pixel lineup. Aside from the security patch, the latest Android 10-based MIUI 11 update for the Redmi K20 Pro also introduces the cool Vlog mode, which allows users to create short videos with artistic focus effects by stitching together multiple still photos.

We have come across multiple posts from Redmi K20 Pro users on the official Mi community forum, detailing the release of a new software update. The update carries the build number MIUI 11.0.4.0.QFKINXM and is 631MB in size. The changelog only mentions two new arrivals – the February Android security patch and Vlog mode. As for the security patch, you can check details about the vulnerabilities it fixes on the official Android security bulletin repository. Plus, there are the usual system security enhancements and bug fixes that come with monthly updates. However, users note that the update doesn't bring any fix for the battery life and freezing issues on the Redmi K20 Pro.

Talking about the Vlog mode, it can be accessed on the home page of the default camera app. It allows users to create short compilation videos of around 10 seconds made from stills taken at varied points during the capture. Users can choose between multiple presets, colour palettes, and background sound effects for their videos. Moreover, the Vlog mode will also allow Redmi K20 Pro users to see a preview of each vlog effect before applying it to their videos.

Realme 6i Specifications Tipped Through a Geekbench Listing; Realme RMX2063 Also Surfaces on Benchmark Site
Call of Duty: Warzone Gets More Than 6 Million Players in 24 Hours Since Launch