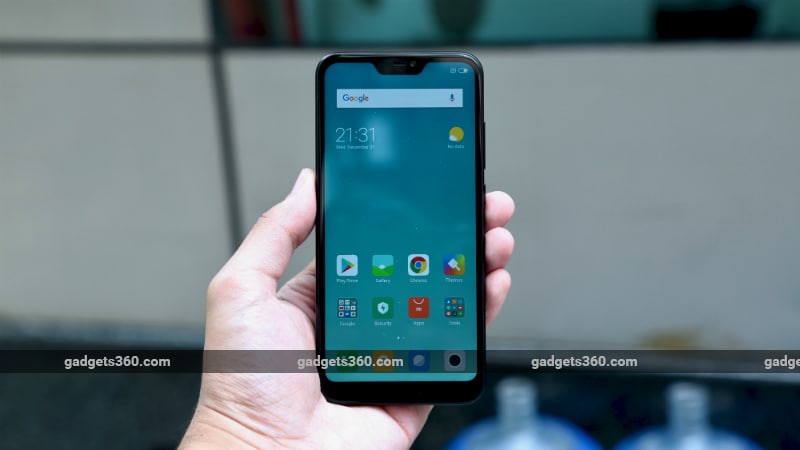 Xiaomi Redmi 6 series has been unveiled in the Indian market, marking the entry of the budget Redmi 6 range in the country. The Chinese phone maker on Wednesday announced the launch of the Redmi 6, Redmi 6A, and Redmi 6 Pro at an event held in New Delhi. All of the three variants run MIUI 9 on top of Android Oreo, sport tall displays with 18:9 and 19:9 aspect ratios, and AI-powered face unlock capabilities. The most premium of the lot, the Pro model, sports a display notch on top. Common features among the three smartphones are dual VoLTE, Face Unlock and Unlock With Mi Band, dedicated microSD card slot, and promised support for Android 8.1 Oreo-based MIUI 10 custom UI. Let's get into the pricing, availability, and specifications of the new Xiaomi series in India.

The Xiaomi Redmi 6 price in India is set at Rs. 7,999 for the 3GB RAM/ 32GB storage variant and Rs. 9,499 for the 3GB RAM/ 64GB inbuilt storage model. The phone will be sold in India starting September 10 via Flipkart and Mi.com. These prices are introductory in nature and valid for the first two months, and may be revised if the rupee continues to depreciate against the dollar.

Xiaomi Redmi 6A price in India is set at Rs. 5,999 for the 2GB RAM RAM/ 16GB onboard storage model and Rs. 6,999 for the 2GB RAM/ 32GB storage model. It will go on sale for the first time on September 19 and will be held on Amazon India and Mi.com. This introductory pricing will also hold for 2 months, after which we may see an increase if the rupee freefall continues.

Finally, the Redmi 6 Pro price in India has been set at Rs. 10,999 for the 3GB RAM/ 32GB storage model. The 4GB RAM/ 64GB storage variant has been priced at Rs. 12,999. It will be sold via Amazon India and Mi.com, with the first sale to be held on September 11. Buyers will get Rs. 500 discount on purchases made using HDFC Bank credit or debit cards while buying the Redmi 6 and Redmi 6 Pro models.

Sensors onboard the Redmi 6 include fingerprint sensor, accelerometer, ambient light sensor, electronic compass, gyroscope, and proximity sensor. There is a 3,000mAh battery under the hood, with support for 5W charging. The smartphone measures 147.5x71.5x8.3mm and weighs 146 grams. It comes in Black, Gold, Rose Gold and Blue colour options.

Redmi 6 Pro specifications
The Redmi 6 Pro is the most premium out of the three Redmi phones launching in India today. It runs MIUI 9.6 based on top of Android Oreo, and sports a 5.84-inch full-HD+ (1080x2280 pixels) panel with a 19:9 aspect ratio and a display notch (with the option to hide the notch). The handset is powered by a Qualcomm Snapdragon 625 SoC, coupled with an Adreno 506 GPU, 3GB/ 4GB of RAM, and 32GB/ 64GB of onboard storage.

Sensors onboard the Redmi 6 Pro include fingerprint sensor, accelerometer, ambient light sensor, digital compass, gyroscope, and a proximity sensor. There is a 4,000mAh battery under the hood, and dimensions of the smartphone are 149.33x71.68x8.75mm. The phone weighs 178 grams. Colour options for the handset include Red, Black, Gold, and Blue.

Why Amazon Turned to Hindi for the Next 100 Million Users in India
Protecting Democracy Is an Arms Race: Mark Zuckerberg