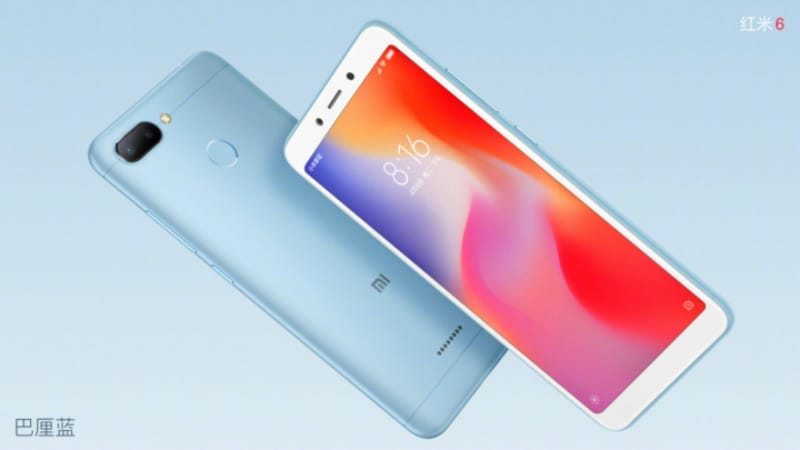 Chinese electronics giant Xiaomi on Tuesday announced the launch of its latest budget smartphones - Redmi 6 and Redmi 6A - at an event held in China, after both of them were spotted in leaks, teasers, and rumours over the past few weeks. The Redmi 6 succeeds last year's popular Redmi 5, and comes with highlights such as Face Unlock, an 18:9 display, a horizontal dual camera setup, and a rear-mounted fingerprint sensor. The Redmi 6 is also claimed to have AI-based capabilities powering its camera, Face Unlock sensor, and other aspects of the handset like the Xiao Ai assistant. In this article, we take a closer look at the Redmi 6 launch, price, availability, and specifications. You can read more about the Redmi 6A launch here.

In terms of optics, the Xiaomi Redmi 6 gets horizontally stacked dual camera setup at the back, with a 12-megapixel primary sensor and a 5-megapixel secondary sensor, with 1.25-micron pixels and an f/2.2 aperture. It features Portrait mode. On the front, the smartphone gets a 5-megapixel selfie sensor with f/2.2 aperture and 1.12-micron pixels, as well as AI beautification features. There is 32GB/ 64GB of inbuilt storage, expandable via microSD card (up to 256GB), with its own card slot.

Connectivity options on the Redmi 6 include 4G LTE, Bluetooth 4.2, Wi-Fi, GPS/ A-GPS, a 3.5mm headphone jack, and Micro-USB. Sensors on board include accelerometer, ambient light sensor, digital compass, gyroscope, infrared, and proximity sensor. The Redmi 6 measures in at 147.5x71.5x8.3mm, and weighs 146 grams. It is powered by a 3000mAh battery.

Facebook Admits It Allows Advertisers to Target Users Based on Their 'Interests'
Flipkart Offers Discounts on Samsung Galaxy S8, Galaxy S8+, Galaxy On Nxt, and More