Xiaomi Redmi 4A India Launch Likely on Monday, Will Be Exclusive to Amazon 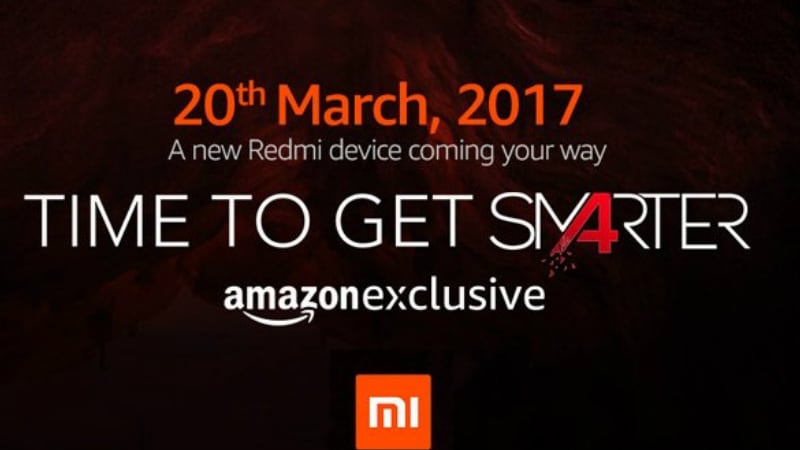 Xiaomi has sent out invites for a launch event on Monday, and the company is now dropping hints on social media running up to launch. The Chinese brand has now confirmed that it is launching a Redmi device at the event and will make it an Amazon exclusive. Both Amazon and Redmi India have tweeted confirmation with the hashtag #TimeToGetSmarter.

The Chinese conglomerate is expected to launch at least one of the Redmi 4 series of smartphones that were launched in November - the Xiaomi Redmi 4 and Xiaomi Redmi 4A. With the repeated emphasis on both the 4 and A symbols in both Amazon India and Redmi India marketing, it seems likely the company will launch the Redmi 4A in India.

Amazon India is also accepting registrations for regular notifications on the upcoming Redmi device, and details on when it will launch. The Redmi 4 is priced at CNY 699 (roughly Rs. 6,900), while the Redmi 4A was launched at an introductory price of CNY 499 (roughly Rs. 4,900) but now it's CNY 599 (roughly Rs. 5,900). The India event on March 20 will be hosted by VP of Xiaomi India Manu Jain, and Product Lead Jai Mani.

Xiaomi Redmi 4 and Redmi 4A specifications

Alongside these two smartphones, Xiaomi also launched the Xiaomi Redmi 4 Prime in China, and priced it at CNY 899 (roughly Rs. 8,900). This variant may also be launched in India as well. The Redmi 4 Prime sports a 5-inch full-HD (1080x1920 pixels) display, a 2GHz octa-core Qualcomm Snapdragon 625 SoC, 3GB of RAM, 32GB of inbuilt storage, and Bluetooth v4.2 connectivity. Apart from this, all other specifications match the Redmi 4. All the smartphones run on MIUI 8 based on Android 6.0 Marshmallow.