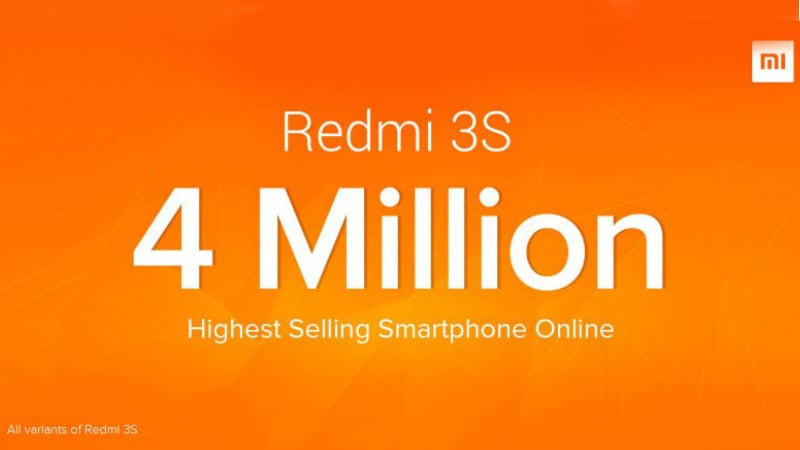 Xiaomi is set to announce a new Redmi smartphone in India on Tuesday, i.e. May 16, and it is largely expected to be the Redmi 4. Ahead of the launch, Xiaomi has announced sale numbers of its predecessors Redmi 3S, Redmi 3S Prime, and Redmi 3S Plus smartphones. The company has confirmed that 40 lakh units (4 million) of the smartphones have been sold in India ever since their launch nine months ago.

This apparently makes the Xiaomi Redmi 3S "highest selling smartphones online" in India, collectively, the company claims, with a note referring to "all Redmi 3S variants". The Xiaomi Redmi 3S and Redmi 3S Prime were launched in August last year, and were priced at Rs. 6,999 and Rs, 8,999 respectively. The Redmi 3S came with 16GB of storage and 2GB of RAM, while the Prime variant sports 32GB storage, 3GB of RAM, and a fingerprint scanner. The Redmi 3S Plus, an offline-only model, was priced at Rs. 8,799.

Back in February, the company had announced it had managed to sell 3 million units of all variants of the Redmi 3S in India.

Connectivity options on the handsets include 4G, Wi-Fi, GPRS/ EDGE, Bluetooth, GPS/ A-GPS, Bluetooth, Glonass, Wi-Fi 802.11 b/g/n, and Micro-USB. The handsets are backed by a 4100mAh battery just like the original Redmi 3.

This shipment information comes just a day before the Redmi 4 launch, hinting that the predecessors did so well in the country, and the successor is expected to do the same. The successor Redmi 4 and Redmi 4 Prime was launched in China in November last year, and it's only fitting that it brings them to India. The Redmi 4 is priced at CNY 699 (roughly Rs. 6,900), while the Redmi 4 Prime was launched at CNY 899 (roughly Rs. 8,900).

Want a Coach to Help You Train for Endurance Races? This App Might Help
Meizu M5 With 4G VoLTE, Fingerprint Sensor Launched at Rs. 10,499