Xiaomi Redmi 1S to Go on Sale Without Registration on Monday 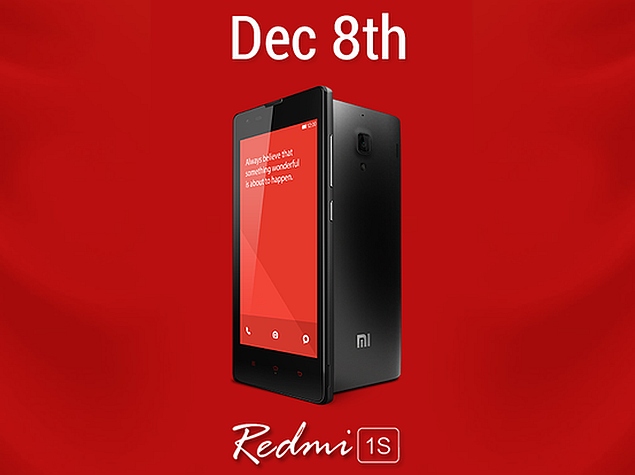 Xiaomi has announced that the popular Redmi 1S budget smartphone will go on sale on Monday via Flipkart without registration 'while stocks last'. The company has not announced exactly when the sale will begin.

The December 8 sale of the Xiaomi Redmi 1S was announced by the firm on its Facebook page and Twitter handle, with the image captioned 'Open for all. No registration. While stocks last.'

Stop whatever you're doing & read - Redmi 1S will be made available on 8th December. RT! pic.twitter.com/JGIW82RMi3

The previous time the Redmi 1S went on sale was on November 25, but Xiaomi did not reveal how many units had gone on sale, and it was widely held as the last flash sale for the popular Rs. 5,999 smartphone.

Xiaomi, also known as China's Apple, had in the same week launched its new budget offering in the market, the Xiaomi Redmi Note phablet, and had successfully conducted the first flash sale on Flipkart on December 2, seeing 50,000 units go 'out of stock' in 6 seconds.

The week before that, Xiaomi had put up 65,000 units of the Redmi 1S for sale on Flipkart. The company however did not detail how fast these units were snapped up. The dual-SIM Xiaomi Redmi 1S features a 4.7-inch 720x1280 pixel IPS-LCD display; Android 4.3 Jelly Bean with MIUI v5; 1.6GHz quad-core Snapdragon 400 SoC (MSM8228); Adreno 305 GPU; 1GB of RAM; 8GB of built-in storage; expandable via microSD card (up to 32GB); 8-megapixel rear autofocus camera with flash; 1.6-megapixel front-facing camera, and 2000mAh battery.

The Xiaomi Redmi Note is the company's new cash crop in India until the higher-end Mi 4 flagship finally rolls out in the country. The company launched two models in India, with a single-SIM 4G LTE variant priced at Rs. 9,999, and running Android 4.4.2 KitKat on a quad-core 1.6GHz Snapdragon 400 CPU and 3GB of RAM. The Xiaomi Redmi Note 4G - becoming available via flash sales and Airtel stores in the second half of December.

The regular dual-SIM Xiaomi Redmi Note 3G is priced at Rs. 8,999 and runs Android 4.2.2 Jelly Bean on a 1.7GHz octa-core MediaTek MTK6592 SoC, coupled with 2GB of RAM. Both variants bear a 5.5-inch 720x1280-pixel IPS LCD screen, and feature a 13-megapixel rear autofocus camera with LED flash, as well as a 5-megapixel front-facing camera. They come with 8GB of built-in storage with expansion via microSD card (up to 32GB).

Common connectivity options on the Redmi Note variants include GPRS/ EDGE, 3G, Wi-Fi 802.11 b/g/n with Wi-Fi Direct and hotspot functionality, Bluetooth 4.0, a Micro-USB port with OTG support, and A-GPS. They are powered by a 3,100mAh battery.