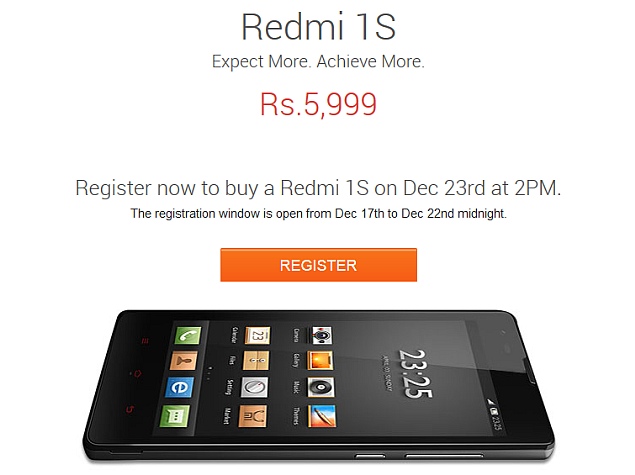 After the dramatic ban on smartphone imports and sales in India, Xiaomi's reprieve last week for handsets based on Qualcomm chipsets will on Tuesday see the Chinese smartphone manufacturer bring the Redmi 1S back on sale again, as promised.

As before, the Xiaomi Redmi 1S will be available via a flash sale on Flipkart at Rs. 5,999, and registrations that make consumers eligible to participate in the sale will end at midnight on Monday. Flipkart reiterates that only one phone will be sold per consumer.

The Redmi 1S flash sale on Tuesday kicks off at 2pm IST, and unlike several previous versions of the sale Xiaomi has not revealed how many units will be going on sale on the day.

This is not the first time Ericsson has filed a lawsuit against a manufacturer in India over infringements of its SEPs, with Micromax, Gionee and Intex also implicated. Under the injunction order (following Xiaomi's appeal), the Chinese manufacturer is allowed to import and sell handsets that run on Qualcomm-based chipsets, such as the Redmi 1S and Redmi Note 4G.

Notably, the company had recently been enjoying success with two consecutive flash sales of its Redmi Note (3G variant), with 50,000 and 75,000 smartphones going out of stock in six seconds and eight seconds respectively.

However, Xiaomi will no longer be able to sell the 3G-variant of the Redmi Note smartphone in India, as it runs on a non-Qualcomm chipset that Ericsson says infringes its patents. Instead, the company will make the Redmi Note 4G handset available in India - though for now it has not announced a precise date.

India to Become Second Largest Smartphone Market in 2016: eMarketer
'I Am Basically Drawn to Anything Vaguely Odd': Sherlock and Game of Thrones Star Mark Gatiss