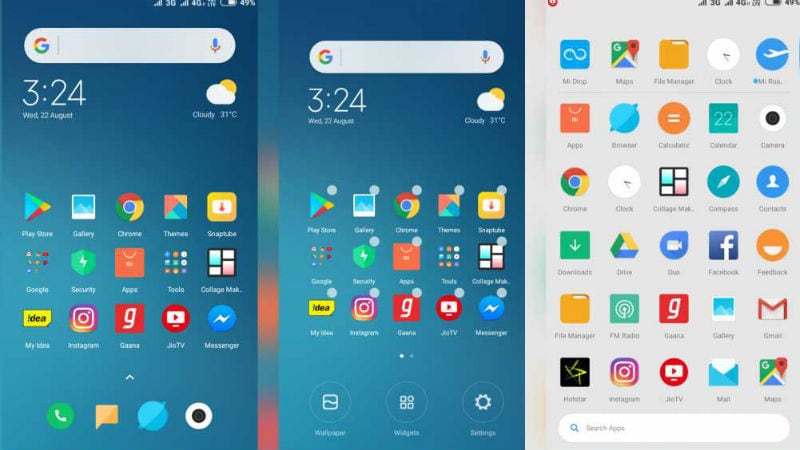 The Xiaomi Poco Launcher comes with an app drawer, unlike the MIUI

Xiaomi's new sub-brand Poco has already launched its first smartphone - Poco F1 - in India. During the launch, Xiaomi noted that the Poco F1 ships with MIUI 9.6 out-of-the-box based on Android 8.1 Oreo, and an MIUI 10 update is said to be coming soon. Notably, the phone is using a customised version of MIUI for the Poco F1, called MIUI for Poco. Poco has outlined a series of changes that it has made to Xiaomi's MIUI, and one of those was a redesigned launcher called Poco Launcher. The Poco Launcher arrived with some new features and for interested users, the Poco Launcher is now available for download in beta ahead of availability on Google Play.

During the Xiaomi Poco F1 launch event, the company noted that that the Poco Launcher will make its way to Google Play, and ahead of that date, an APK of beta v0.1.5 has been shared by the company in an MIUI forum post. The key highlight of the new Poco Launcher is that it comes with an app drawer.

The lack of an app drawer has been a long-standing decision by the creators of MIUI. The Poco Launcher however features an app drawer with automatic grouping of apps as per various categories, hidden app space, and support for third-party icon packs. There is also a search bar at the bottom and an option to hide apps. Poco had said that the Poco Launcher would be available via Google Play starting August 29, but it is uncertain if that will be a non-beta, stable release.

As per the MIUI forum post by MIUI Beta Team - Global, "The new app drawer facilitates better app searches. We've taken into consideration the thumb area & moved the search bar at the bottom allowing you for better app search." The post contains a preview of the Poco Launcher on a Xiaomi Redmi 4X handset. It shows the Home screen, app drawer, and the search option.