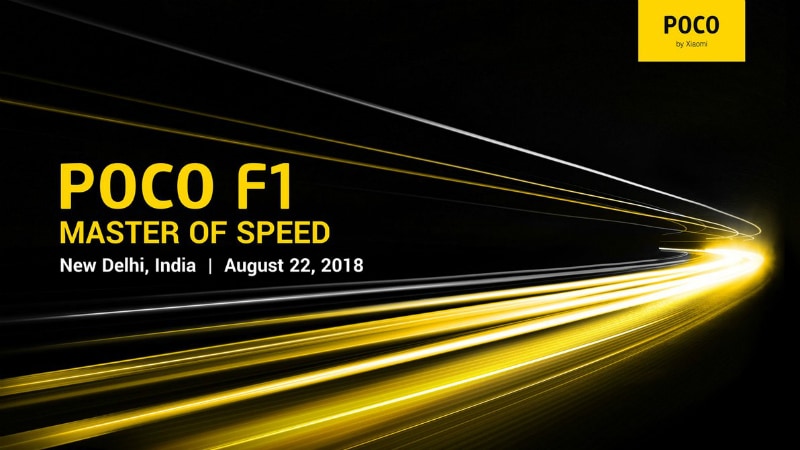 Poco India has scheduled an event in New Delhi to launch the Poco F1.

Poco F1, the first smartphone from Xiaomi's new sub-brand Poco, is launching in India on August 22. The official Twitter account of Poco India revealed the Poco F1 launch date on Monday without detailing any key specifications or price of the upcoming handset. The model confirmed by the sub-brand notably surfaced online as Pocophone F1 in the recent past. An unboxing video of the Poco F1 also emerged on YouTube last week that highlighted its display notch and dual rear camera setup. The smartphone is said to debut in two different storage variants - with 64GB and 128GB of onboard storage options. While the Poco F1 price for the 64GB variant is speculated to debut in Eastern Europe at EUR 420 (roughly Rs. 33,300), its 128GB variant could arrive at EUR 460 (roughly Rs. 36,400). India prices of the smartphone are likely to emerge at the time of formal launch later this month.

As announced through the Twitter account of Poco India, Xiaomi's Poco will launch the Poco F1 on August 22. The brand that is led by former Google executive and Xiaomi's Lead Product Manager Jai Mani is hosting an event in New Delhi to announce the formal launch.

While Poco hasn't revealed the specifications of the Poco F1, an initial listing on a Belarusian online store suggested that the handset will come with a 6.18-inch full-HD+ display that will an 18.7:9 aspect ratio. The Poco F1 is also rumoured to come with a Qualcomm Snapdragon 845 SoC along with a liquid cooling system. Codenamed Beryllium, the new model is also said to run Android 8.1 Oreo with MIUI on top and come with a 4,000mAh battery. It is also reported to have a rear-facing fingerprint sensor and a dual rear camera setup, supporting optical zoom. A Bluetooth SIG certification also previously hinted at a combination of a 12-megapixel primary sensor and a 5-megapixel secondary sensor with a dual-pixel autofocus lens. Moreover, a recent video preview of the smartphone also showed its performance on AnTuTu benchmark in which the hardware scored 258,149 points.

Xiaomi is rumoured to sell the Poco F1 in Eastern Europe with a starting price of EUR 420. Therefore, we can safely presume that the new model will be available in India in the sub-Rs. 40,000 price bracket.

Samsung May Shut Down Operations at China Mobile Manufacturing Factory