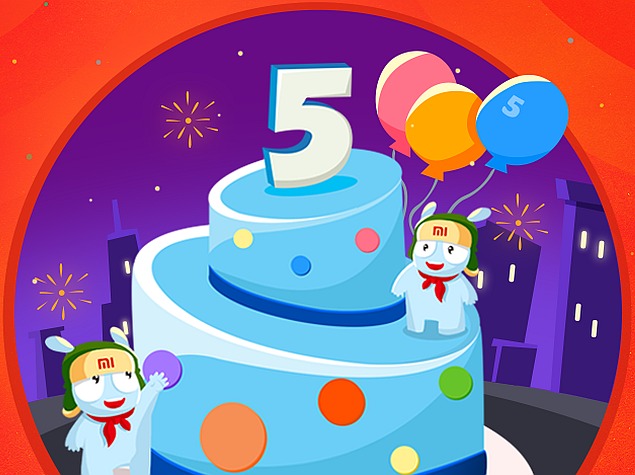 Celebrating its fifth birthday globally this week, Xiaomi also announced two new partnerships in India on Tuesday. The company has sold its phones online through Flipkart since it launched in July 2014, but now, its phones will be available on Snapdeal and Amazon as well.

As a result, Xiaomi's phones will be available on Flipkart, Amazon and Snapdeal from now, in addition to offline retail via Airtel and The Mobile Store, breaking Xiaomi's earlier exclusive deal with Flipkart.

"We are glad to give Mi fans more options to purchase Mi products," says Manu Jain, Head of India Operations, Mi India. "We are truly excited to be working with a variety of partners and expect these partnerships to be super successful."

The company's Mi Fan Festival being held on Wednesday, which yesterday saw the company announce the free bundling of accessories with the Redmi Note 4G, will also see other special offers valid for Wednesday - a discounted Xiaomi Mi 4, and, an open sale of the Xiaomi Redmi 2 across all the online partners, and The Mobile Store. Also, the company is bringing the MiPad back in stock, and available to purchase without registrations from all the online partners.

The Xiaomi Mi 4's discounted prices on Wednesday are Rs. 17,999 for the Mi 4 16GB variant, and Rs. 21,999 for the Mi 4 64GB variant. The company added availability details of the previously announced Xiaomi Redmi Note 4G bundled offers, with the 5400 Power Bank being made available both the offline partners, and the Mi In-Ear Headphones being made available via all three online partners.

"Mi Fan Festival is a huge online party that we throw every year to bring Mi fans together all around the world for a day of non-stop celebration," says Hugo Barra, Vice President, Xiaomi Global. "It's our way of thanking our fans for their huge support. We're super thrilled to have Mi India joining the party this year and look forward to spending many more birthdays together."

"We are excited to partner with Xiaomi to launch its highly sought-after range of smartphones and accessories to our customers across the country," says Tony Navin, Senior Vice President, Electronics and Home, Snapdeal. "We believe that the extensive delivery network panning across tier 2 and 3 cities and towns of India will be of great value to Xiaomi in reaching out to a segment of consumers seeking true value in their devices.
Comments

If Algorithms Know All, How Much Should Humans Help?
Microsoft Lumia 640 and Lumia 640 XL Dual-SIM Phones Launched in India