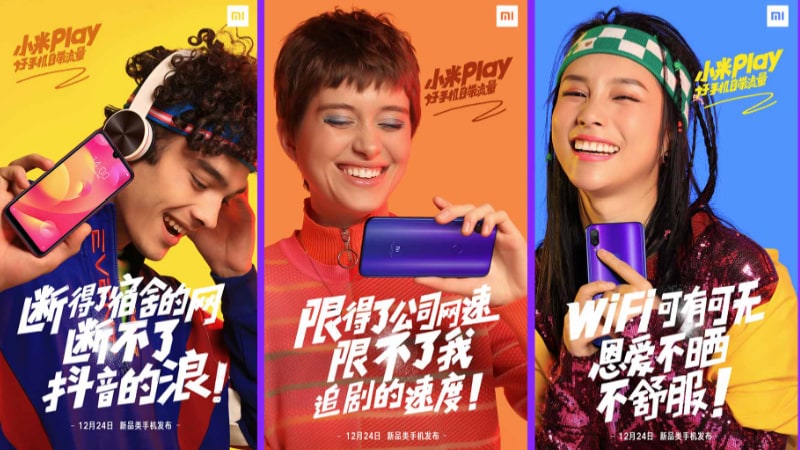 Xiaomi Mi Play is set to launch on December 24

Just a day ago, Xiaomi officially announced that it is launching the Xiaomi Play smartphone in China. Now confirmed to be the Xiaomi Mi Play, its launch is set for December 24, and teasers have also started coming in. The new teasers posted by Xiaomi reveal the smartphone's design from the front and back, and it is seen sporting a waterdrop-shaped notch up front, and a dual camera setup at the back of the device. In fact, the design appears to match one of the TENAA listings from earlier this month, presumed to be the Xiaomi Redmi 7 Pro.

Xiaomi has started to tease the new Xiaomi Mi Play smartphone on its website, with several teasers posted on the page. The Mi Play series will debut in China, and the first smartphone - the Xiaomi Mi Play - is set to launch on December 24. The teasers confirm that there will be a Blue variant with gradient finish, and a waterdrop-shaped notch up front. At the back, there is also seen a dual camera setup stacked vertically and flash sitting beneath the sensors. There's a rear fingerprint sensor seen at the back as well.

The Xiaomi Mi Play teasers suggest a Snapdragon processor, and good sound quality. Judging by the name, the Xiaomi Mi Play could be a gaming smartphone by the Beijing-headquartered company. Teasers also suggest that the smartphone is expected to come with media-centric features, good audio, and more. The company has started taking reservations of interest for the phone, and all details are expected to be made official next week on December 24. There is speculation that what was thought to be the Redmi 7 Pro listed on TENAA last week, with model number M1901F9E, may in fact be the Xiaomi Mi Play, as the design certainly does seem to match.

To recall, Huawei's sub-brand Honor recently brought the Honor Play with gaming-focused features such as GPU Turbo and a dedicated NPU that comes with the Kirin 970 SoC. However, it is worth noting here that the company already has its Black Shark range to meet the requirements of the nascent gaming phone market.

There was a rumour that the new Xiaomi phone could be a Chinese version of the Poco F1, but the teasers show a completely different design, not identical to the Poco F1. Alongside the Mi Play, Xiaomi is nowadays busy in preparing its 48-megapixel camera phone that is rumoured to be a part of the existing Redmi series. The smartphone is also said to have a glass back design and may include a Qualcomm Snapdragon 675 SoC.