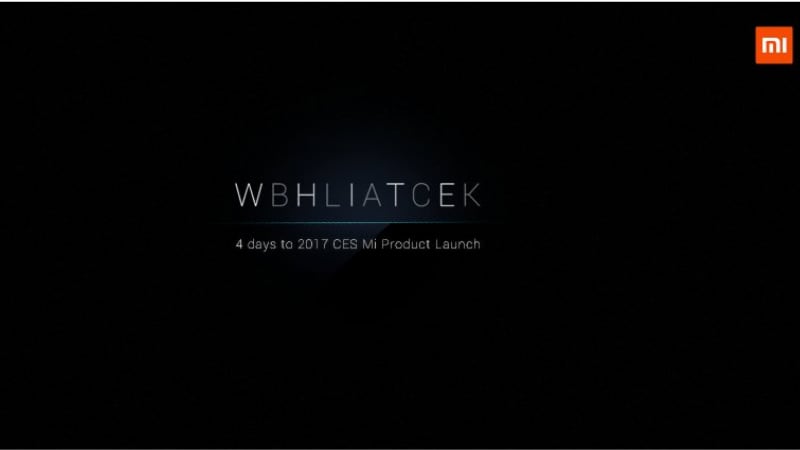 Xiaomi is all set to make its debut at CES 2017 in a few hours. Based on its latest teaser, the Chinese tech giant is expected to launch the Mi MIX White variant among other things. The event will be live streamed online for users across the globe.

The event will begin at Friday 12.30am IST (Thursday 11.00am PST), and the company is live streaming the event on the Mi website, as well as YouTube.  As mentioned earlier, Xiaomi is expected to unveil the white variant of the Mi MIX smartphone at the event. The teaser has the words 'WBHLIATCEK' written in the middle, which is essentially an anagram for the words 'Black' and 'White'. Previously, the Mi MIX was unveiled only in Black, and now the White colour variant could see the light of the day.

The Xiaomi Mi MIX concept smartphone was unveiled back in October. The smartphone has a bezel-less screen in the front - the first of its kind on a smartphone. It sports a 6.4-inch full-HD (1080x2040 pixels) display with 362ppi pixel density. It is powered by the Snapdragon 821 processor and comes with 4GB of RAM. The phone packs 128GB of internal storage, 16-megapixel primary camera on the rear, and a 5-megapixel front shooter for selfies. Lastly, the Xiaomi Mi MIX packs a 4400mAh non-removable battery, and weighs 209 grams.

Apart from this, Xiaomi has been posting teasers regularly on its social media accounts, and based on these teasers, we can speculate that the Chinese conglomerate looks to unveil smart home appliance and maybe even a laptop. Of course, all of this is just speculation and should be taken lightly.

Xiaomi has been doing field testing in the US for a while now, and CES could be the right platform to announce the first smartphone for the competitive market. What do you think Xiaomi will announce at its CES event? Let us know in the comments below.

LG G6 to Reportedly Launch Soon, Do Away With Modular Design
Vine to Transform Into Vine Camera App on January 17