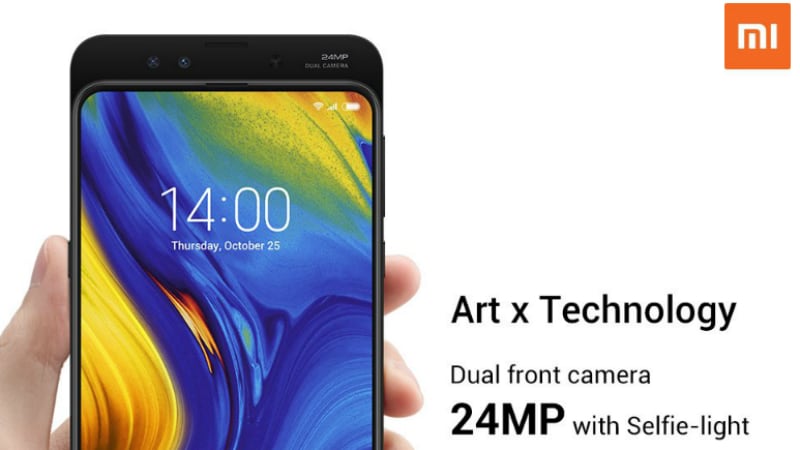 Xiaomi Mi Mix 3 launch is scheduled for October 25 at an event to be held in China. With just about 7 days to go for the official unveiling, Xiaomi has started teasing major specifications of the upcoming premium smartphone. In the latest round, the Chinese phone maker has teased that the Mi Mix 3 will sport dual 24-megapixel selfie cameras, and a selfie-light, housed in the manual camera slider confirmed earlier this month by the company. Additionally, the Mi Mix 3's true full screen display sans notch is shown off again in the teaser, as well as in an alleged live image.

This development comes to us via a post on Xiaomi's official Weibo account, something that its Twitter handle also later confirmed. A recent teaser from Xiaomi confirmed the presence of 5G connectivity and 10GB of RAM on the phone. This could make it the world's first smartphone with so much RAM, provided Oppo does not release its top-end Find X variant before October 25.

Another post on Weibo, by a tipster, gives us a look at an alleged live image of the Xiaomi Mi Mix 3. This image matches the renders that Xiaomi has teased. A GIF is also seen in the Weibo post with the manual camera slider in action.

The Xiaomi Mi Mix 3 is expected to run Android Pie, and sport a Samsung AMOLED display panel with a screen resolution of 1080x2340 pixels and 19.5:9 aspect ratio. Apart from that, the handset will sport a Qualcomm Snapdragon 845 SoC, coupled with 10GB of RAM and up to 256GB of internal storage.

While rear camera details have not been outed yet, both front and rear camera modules are expected to be placed on the camera slider. Interestingly, the phone will not get a motorised slider like the Oppo Find X, but instead one like the Honor Magic 2. Xiaomi could also introduce an in-display fingerprint sensor on the Mi Mix 3, however there are no leaks around that yet.