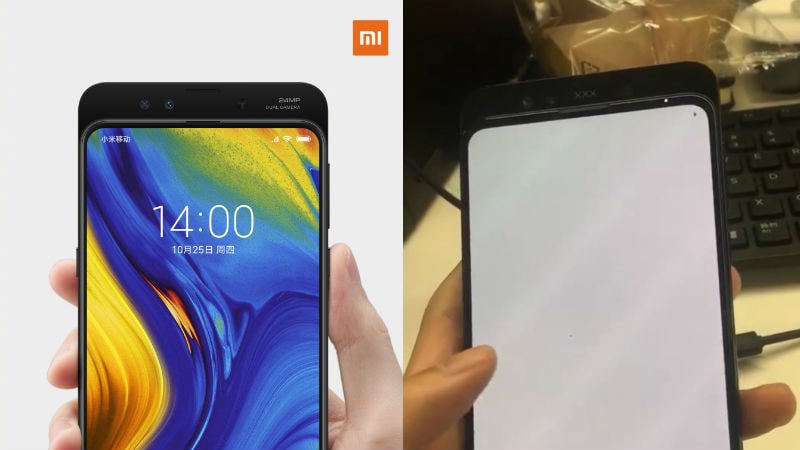 Xiaomi Mi Mix 3 is set to launch later this week and details related to its specifications, features, and design continue to pour in. The Mi Mix 3 will officially be unveiled on October 25 in China, and with just a couple of days to go, Xiaomi has confirmed one of its camera features. The company has informed that the camera in the upcoming smartphone will support 960fps slow-motion video recording. Meanwhile, a fresh set of images said to be of the Xiaomi Mi Mix 3 has been spotted showcasing its fingerprint sensor and dual front camera setup. To recall, Xiaomi had recently confirmed that the smartphone will sport dual 24-megapixel selfie cameras.

Donovan Sung, a global spokesperson for Xiaomi, on Monday, posted a tweet confirming that the Mi Mix 3 will feature slow-motion video recording support, capable of capturing 960 frames per second. He posted a sample video clip showcasing the functionality. To recall, Sony was one of the first major mobile makers to introduce the 960fps video recording support in its Xperia XZ Premium and Xperia XZ2 handsets. Later, Samsung had brought the 'Super Slow Motion' mode with the launch of its 2018 flagships - Galaxy S9 and Galaxy Note 9. Recently, another Chinese manufacturer Huawei had added 960fps video recording to the P20 Pro smartphone.

Xiaomi could also introduce an in-display fingerprint sensor in its upcoming Mi Mix 3 smartphone, however, this is yet to be confirmed. Meanwhile, a video of an alleged Mix 3 posted by YouTube channel Tech News hints at a possible fingerprint sensor under the display, or a fast unlock feature. However, there is no clarity on the same.

Interestingly, a post on Weibo, by a tipster, gives us a look at an alleged live image of the Xiaomi Mi Mix 3. According to the image, the Mi Mix 3 will feature a rear-mounted fingerprint sensor. Additionally, the handset is seen to come with a glass back, so wireless charging should be enabled. The leaked image also showcases a vertically positioned dual rear camera setup. Additionally, in another post on Weibo, a tipster provided more alleged images of the handset showcasing a dual front-facing camera setup present on the slider and a bezel-less design.

Meanwhile, in another Mi Mix 3 teaser posted by Xiaomi on Weibo, the company has suggested that there will be an art-focussed special edition of the handset. A rough translation of the text suggests that Xiaomi has worked with the British Museum to design a Ceramic White Colour variant of the Mi Mix 3.

Amazon Great Indian Sale Is Coming Back and Here Are All the Top Deals Revealed So Far
Xiaomi-Backed Yeelight Arrives in India With 4 Smart Lights Starting at Rs. 2,499