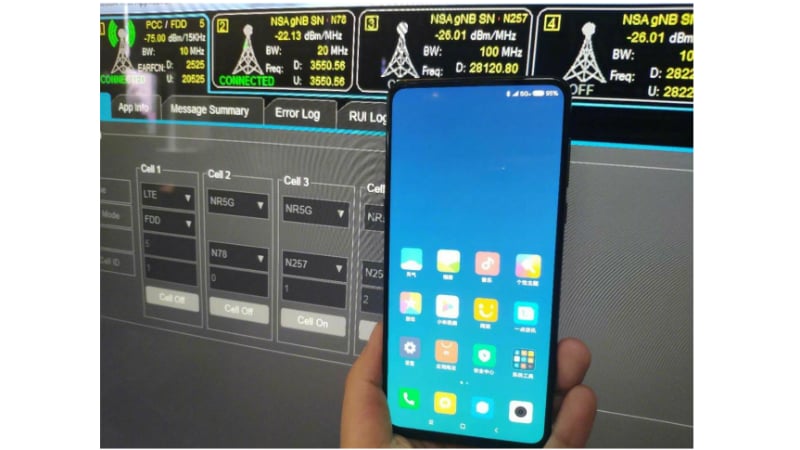 Xiaomi Mi Mix 3, the Chinese phone maker's upcoming offering, is all set to be unveiled this October

Xiaomi Mi Mix 3, the Chinese phone maker's upcoming premium smartphone, is all set to witness an unveiling in October this year. This will be the company's next bezel-less smartphone with a focus on high-end internals as well as a premium design language. In classic Xiaomi fashion, official teasers for the bezel-less smartphone are now being released at regular intervals. Two new ones reveal some substantial upgrades in the Mi Mix 3. First, the smartphone is expected to support 5G networks right out-of-the-box, and secondly, will feature a unique slider camera mechanism. Let's get into the details.

In a post on Chinese microblogging platform Weibo, Xiaomi's co-founder and President Lin Bin teased a photo of the upcoming Mi Mix 3 in front of a what appears to be a 5G testing station. Add to that, the status bar on the phone also has "5G+" written on it. The upcoming handset could come equipped with Qualcomm's 5G-enabled chip once it launches. However, don't get your hopes too high, as 5G capabilities might be rolled out to the Mi Mix 3 "next year", as per this tweet by Xiaomi's global spokesperson, Donovan Sung.

In yet another post on the social networking website last week, Xiaomi's Lin Bin showed off the camera slider on the Mi Mix 3. However, a hands-on video has now appeared on YouTube that shows that this slider will be manually controlled. From the looks of it, the mechanism will resemble the setup teased on the Honor Magic 2, and not the automated one seen on the Oppo Find X. However, it is unclear whether the entire back panel will slide or not.

Late last month, Xiaomi's official channels had confirmed that the Mi Mix 3 would have a near-bezel-free display with no display notch on top. The camera slider, possibly encompassing the front and rear camera sensors, has been put in place to adjust for the shortcomings.

As for specifications, previous rumours suggest that the Xiaomi Mi Mix 3 is expected to sport a Samsung QHD+ AMOLED panel with COP packaging technology. It will be powered by a Qualcomm Snapdragon 845 SoC, and there will be a 20-megapixel selfie camera.