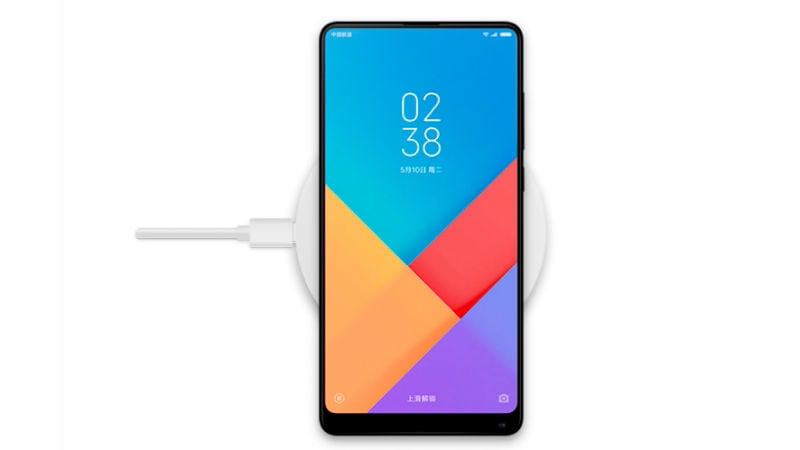 Mi MIX 2s, the next flagship smartphone from Xiaomi, will be launched by the company on March 27. While Xiaomi had already noted that the Mi MIX 2s will be the company's first handset with the Qualcomm Snapdragon 845 SoC, not many official details have been available about it. However, the Chinese company has now let out a teaser which confirms the presence of wireless charging technology support on the Mi MIX 2s.

Xiaomi has tipped the feature via its official Weibo account. The teaser posted on the website does not mention wireless charging explicitly. However, the image in the poster contains a text which translates to "Not Just" alongside a symbol which is similar to Qualcomm's quick charge technology. Also present in the picture is a battery charging sign and a device which appears to be a charging pad. All of the above points to fast charging as well as wireless charging support. It remains to be seen if Xiaomi will ship the smartphone bundled with the charging pad or not.

Notably, this is not the first time that reports have suggested that the Xiaomi Mi MIX 2s will come with wireless charging support. An earlier report had claimed that the smartphone will include features like the Qi standard wireless charging, ARCore, and vertical dual camera setup. The Chinese manufacturer was added to the Wireless Power Consortium last year, and the flagship Mi 7 was earlier expected to become its first phone to support the technology. A video obtained from MIUI's firmware log had revealed directions for aligning the phone with a Qi wireless charging pad.

Other specifications expected in the Xiaomi Mi MIX 2s a 6.01-inch OLED screen made by Samsung, and an under-display fingerprint scanner. The leaks of the alleged Mi MIX 2S have also shown that the upcoming Xiaomi smartphone will come with a massive 4400mAh battery set up. They also highlight that the handset may come with 8GB RAM and 256GB inbuilt storage. Also present in the smartphone could be a selfie camera notch at the top right corner.

Glimmers of Hope for Women in the Male-Dominated Tech Industry
Artifact Release Date, Platforms, Price, and Everything Else You Need to Know About Valve's Next Game After Dota 2