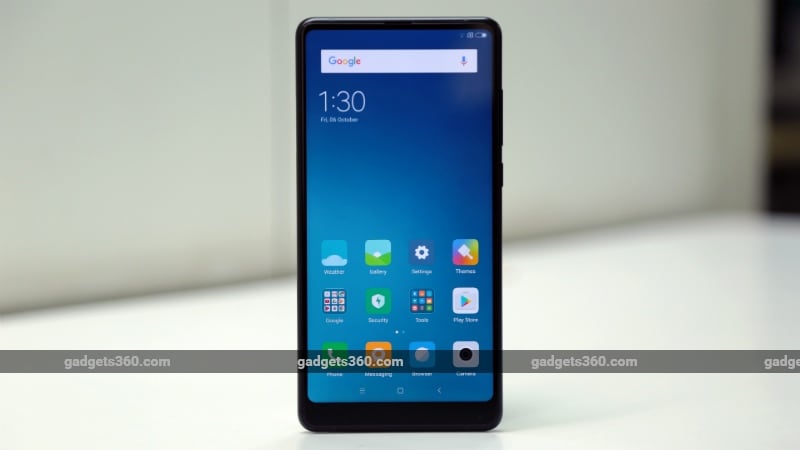 Xiaomi Mi MIX 2 (Review), the company's top-end bezel-less display smartphone of 2017, has received a permanent price cut in India. The smartphone is now available to buy at Rs. 32,999 via offline retailers, Gadgets 360 has learnt. We can expect Xiaomi to announce the price cut officially soon, and see the new price on Flipkart and Mi.com in the near future as well.

The Xiaomi Mi MIX 2 was launched in India back in October, and was made available in its first sale the same month. The smartphone was launched in a single variant in India, featuring 6GB of RAM and 128GB of storage, priced at Rs. 35,999. The new price represents a price cut of Rs. 3,000, making it significantly cheaper than the OnePlus 5T and Nokia 8, its primary competitors at that price point.

The dual-SIM (Nano) Xiaomi Mi MIX 2 runs MIUI 9 based on Android 7.0 Nougat. It sports a 5.99-inch full-HD+ (1080x2160 pixels) LCD display with an 18:9 aspect ratio, and is powered by a Qualcomm Snapdragon 835 SoC that's coupled with 6GB of LPDDR4x RAM. The dual-SIM (Nano-SIM) smartphone sports a 12-megapixel Sony IMX386 rear camera sensor with 1.25-micron pixels, 4-axis optical image stabilisation, 5-piece lens, an f/2.0 aperture, as well as a facial recognition feature. On the front, it bears a 5-megapixel front camera, also with the facial recognition function that can be used to unlock the smartphone.

The company says the Mi MIX 2's display has a pixel density of 403ppi, and is complete with DCI-P3 colour gamut support. The smartphone has minimal bezels on three sides, with only a 'bottom chin' that sports the front camera and other sensors.

With no top bezel to house the earpiece, the company has decided to use a 'hidden sound-guided speaker'. The Xiaomi Mi MIX 2 bears a ceramic body with a 7-Series aluminium frame and an 18K gold plated camera ring on the rear panel.