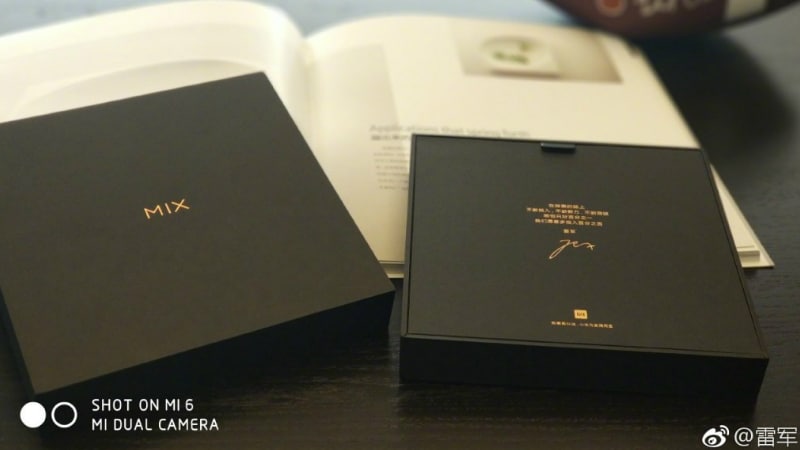 Xiaomi's Mi MIX successor has been leaked on several occasions in the past, and the company has confirmed an event on September 11, for its official unveil. The Xiaomi Mi MIX 2 smartphone is tipped to come with even thinner bezels, possibly the Snapdragon 836 SoC, and a unique 3D facial recognition highlight feature as well. Now, the smartphone's retail box has been revealed, courtesy CEO Lei Jun, along with promo campaign images as well.

Jun shared images of the retail box of the Mi MIX 2 on social networking site Weibo. It's a flat square-shaped black coloured box that has a lid with a message. The lid hides the Mi MIX 2 and its packaged internals from being revealed. Various promo campaign images have also been revealed showing a man holding no phone while taking a picture. This hints at the bezel-less nature of the smartphone, merging the outside imagery with what is shown on the display of the smartphone.

On his Weibo page, Jun also talked about how Xiaomi convinced Google to extended support for aspect ratios apart other than 16:9 that the company supposedly preferred. For the Mi MIX smartphone - which had a 17:9 aspect ratio - Xiaomi apparently had conversations with Google for over six months, after which the tech giant agreed to add support.

Xiaomi is hosting its Mi MIX 2 event just a day ahead of the iPhone 8 launch on September 12 at the University of Technology Gymnasium in Beijing. Based on preliminary leaks, the upcoming Mi MIX 2 will sport an impressive 93 percent screen-to-body ratio which is even more than what we saw in its predecessor. To recall, the Mi MIX featured edge-to-edge display with 91.3 percent screen-to-body ratio.

Xiaomi's Mi MIX 2 is widely rumoured to pack 6GB of RAM and sport a 6.4-inch QHD (1440x2560 pixels) display. In the camera department, the phone is said to feature a 13-megapixel front camera while a 19-megapixel sensor is said to be present at the back. The leaks so far have claimed that Xiaomi Mi MIX 2 will come in several variants including 4GB RAM with 128GB storage, 6GB RAM with 128GB storage, and 8GB RAM with 256GB storage. It is being speculated that the 8GB RAM variant will be a limited edition. The smartphone is said to pack a 4500mAh battery. A recent leak also suggests that the smartphone will run the latest Android 8.0 Oreo out-of-the box.

iPhone 8 Could Let You Activate Siri via the Sleep/ Wake Button
Google App for iOS Gets Twitter-Like Trending Feature, Instant Answers, and More