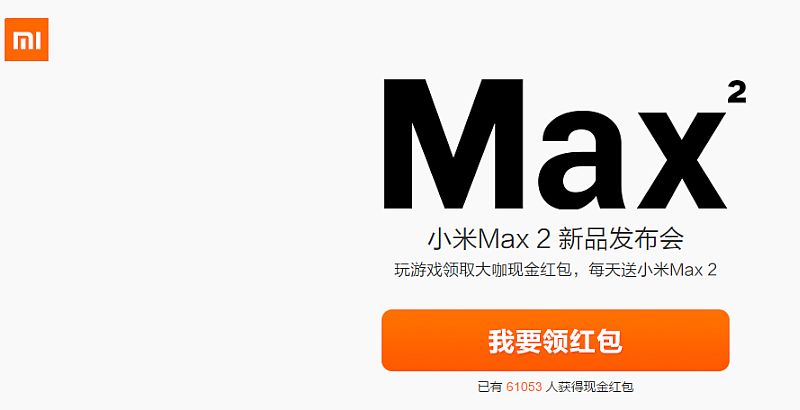 Xiaomi has finally revealed that it will be launching the Mi Max successor on May 25 in China. The company launched a dedicated website where it's teasing the upcoming Xiaomi Mi Max 2 for next week launch.

The dedicated website is teasing some features like over 6-inch display on the Mi Max 2 alongside a large 5000mAh battery. As rumoured earlier, the Xiaomi Mi Max 2 will be going on sale in China first. The company has also teased the launch on Weibo.

Based on the leaks so far, the Xiaomi Mi Max 2 is said to come in 4GB of RAM with Snapdragon 626 SoC, and 6GB of RAM with Snapdragon 660 SoC variants priced at CNY 1,499 (roughly Rs. 14,000) and CNY 1,699 (roughly Rs. 15,900) respectively. Some of the other rumoured specifications include a 6.44-inh full-HD display and 12-megapixel rear camera with Sony IMX378 sensor. The phone is also said to sport a 5-megapixel front camera. Much like the Mi Max, the Xiaomi Mi Max 2 is also likely to launch outside China. The company is also widely expected to introduce a 128GB storage variant of the Mi Max 2.

Some of the purported leaked images have suggested that the Mi MaX 2 will sport an all-metal body. The handset is also said to pack dual speaker grilles at the bottom edge of the device and a USB Type-C port. The 3.5mm audio jack is seen on the top of the device, and the fingerprint scanner is situated in the centre at the back, just like its predecessor.

Last year, Xiaomi was claimed to have managed to ship 1.5 million units of the Mi Max in the two months since its launch in China.

Xiaomi Redmi 4A to Be Available for Pre-Orders via Mi.com Today
WannaCry Ransomware: CERT-In Says No Report of Global 'Adylkuzz' Cryptocurrency Cyber-Attack in India