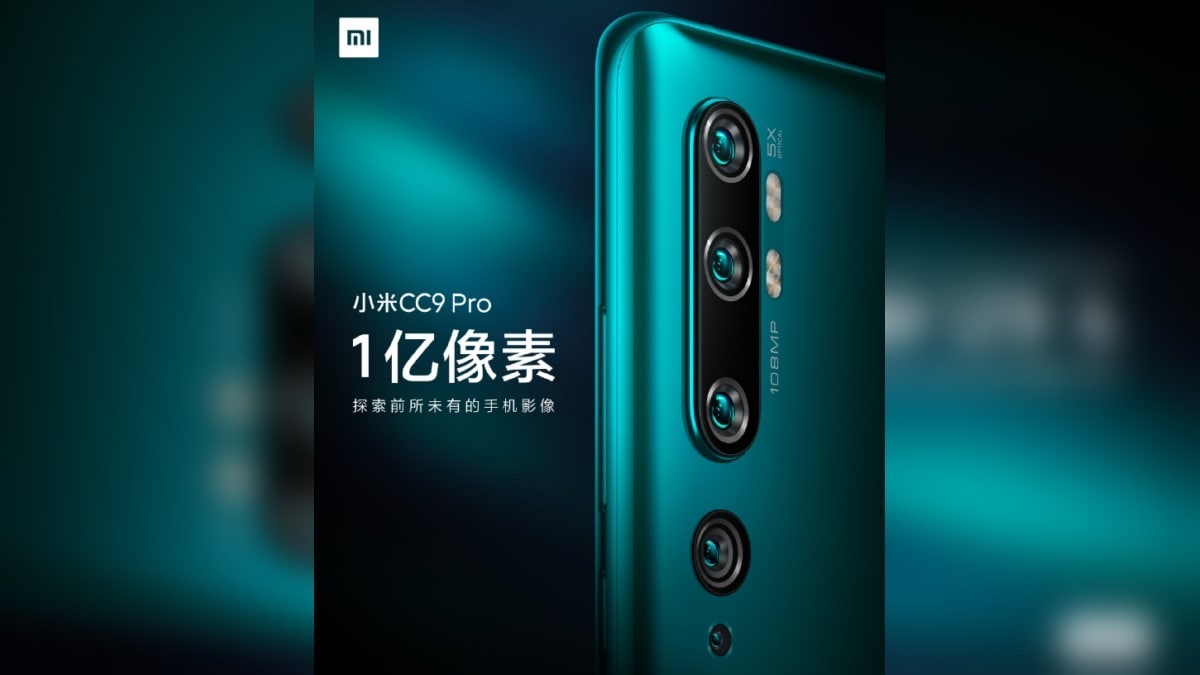 Xiaomi Mi CC9 Pro has been making rounds of the rumour mill lately, and also received the mandatory 3C certification in China ahead of its official debut. The Chinese smartphone maker has now announced that the Mi CC9 Pro will be launched November 5 packing five rear cameras with a 108-megapixel main snapper. Xiaomi has also teased the launched of its first smartwatch and the Mi TV 5 series of smart TVs. Ahead of the launch though, alleged hands-in images of the Mi CC9 Pro have surfaced online showing a curved display, and it has been spotted on Geekbench as well.

The official Millet phone Weibo account has shared the first official render of the 'Xiaomi CC9 Pro', showing its rear panel flaunting a glossy finish with a jade green colour. The Mi CC9 Pro is shown sporting five rear cameras and two dual-LED flash modules. The main camera will be 108-megapixel snapper that will employ Samsung's ISOCELL Bright HMX sensor. The phone will also offer 5x optical zoom support, a feature that we are yet to see on a Mi CC9-series phone so far.

Ahead of the phone's official debut, alleged live images of the Mi CC9 Pro have been leaked online. The leaked photos, which come courtesy of tipster Mukul Sharma, show the phone's curved display, a waterdrop notch, and hint at a tall aspect ratio. Another leaked image gives us a closer look at the phone's penta-lens rear camera setup. A Xiaomi phone codenamed “Tucana”, alleged to be the Xiaomi CC9 Pro, has been spotted on Geekbench packing the octa-core Snapdragon 730G SoC paired with 6GB of RAM and running Android 9 Pie. The specifications of the Xiaomi CC9 Pro on its Geekbench listing, which was first spotted by tipster Sudhanshu Ambhore, are similar to that of a previous leak.

Xiaomi Mi CC9 Pro will be launched at an event on November 5, and will be accompanied by the debut of Xiaomi's Mi TV 5 series and the company's first smartwatch under the Xiaomi brand. The Millet TV Weibo account has confirmed that the Mi TV 5 series will debut on November 5, and just like its predecessors, will offer great visual experience at an affordable price. Lastly, the official Mijia Weibo account has also posted a render of its upcoming smartwatch, which looks more like a wide fitness band. As per another teaser, the upcoming smartwatch will offer features like calling, music playback, and messaging among others.