Mi CC9 Pro will feature a 32-megapixel main camera that will do pixel binning. 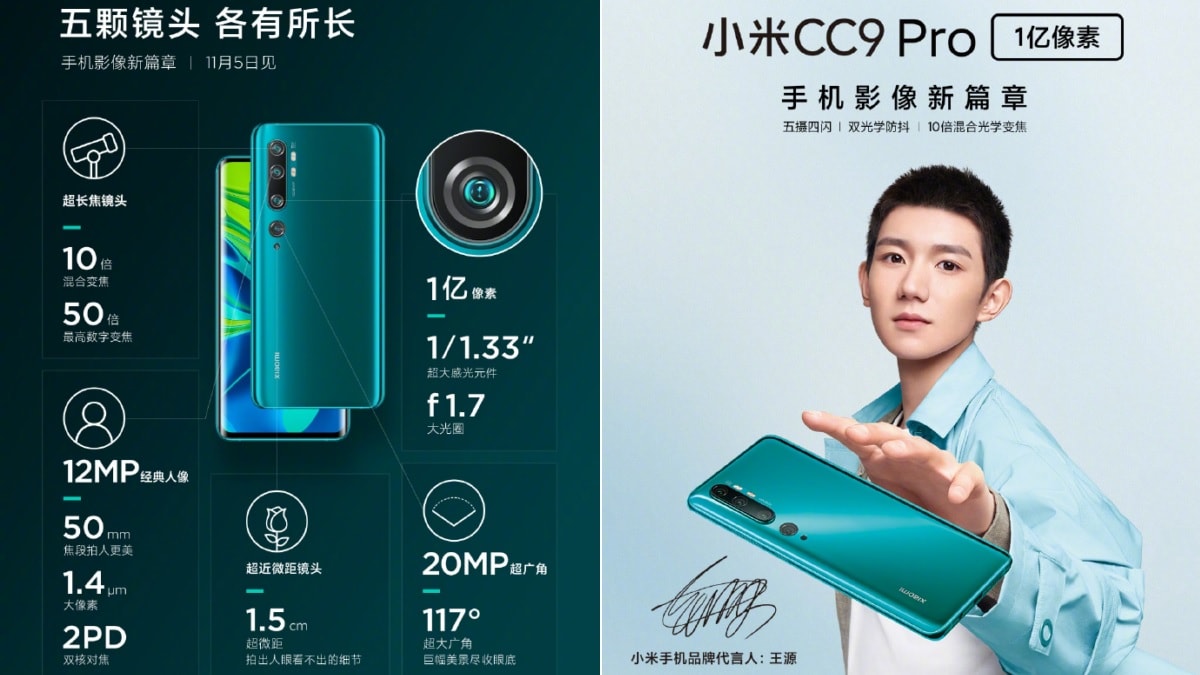 Xiaomi recently confirmed that the Mi CC9 Pro with a penta-lens camera setup, a 108-megapixel snapper, and 5x optical zoom optical will launch on November 5. The company has now shared a few camera samples that highlight the level of the detail that the Mi CC9 can capture, especially after using the zoom function. Xiaomi chief Lei Jun has also shared details about the phone's camera hardware. Additionally, the Mi CC9 has now been spotted on TENAA, revealing its key internal specifications ahead of its official debut. Xiaomi has also begun teasing the launch of the Mi Note10, which the company claims will be its first phone to come equipped with a 108-megapixel main camera.

The Mi CC9 Pro has been officially confirmed to offer 5x optical zoom, which in theory means better quality shots with minimal loss in detail while zooming in. The camera samples shared by Xiaomi emphasise the same, while the accompanying post states that Mi CC9 Pro users can take advantage of up to 5x optical zoom and 10x hybrid zoom on the phone. However, Xiaomi is yet to specify whether OIS (Optical Image Stabilisation) will be a part of the package, and in case it there, what lens it will be a part of. A few other camera samples highlight the incredible amount of detail the 108-megapixel camera can bring in a photo.

Prior to its launch though, the Mi CC9 Pro has been spotted on TENAA, revealing its key internal specifications. As per the TENAA database, the Mi CC9 Pro will be powered by an octa-core processor – most likely the Snapdragon 730G – and will come in three variants with 6GB, 8GB, and 12GB RAM. The phone will pack a 32-megapixel front camera, but apart from the main 108-megapixel rear camera, the resolution of rest of the four cameras on the back are not listed.

The phone will be able to capture 4K videos, but won't support storage expansion. Talking about storage, the Mi CC9 Pro will be offered in 64GB, 128GB, and 256GB storage options, while the colour options will be black, blue, grey, green, pink, purple, red, and white. Dimensions of the phone are listed as 157.8x74.2x9.67mm, and it tips the scales at 208 grams. The phone will come equipped with a 6.47-inch full-HD+ (1080 x 2340 pixels) OLED display that will be kept on by a 5,170mAh battery, but there is no word on support for fast charging.

Xiaomi chief, Lei Jun, has shared details about the Mi CC9 Pro's camera hardware ahead of its launch. The phone's penta-lens camera setup will include a regular 108-megapixel camera, a telephoto camera, a portrait lens for depth-sensing, a macro camera, and a wide-angle camera. The main 108-megapixel camera comes with an f/1.7 lens. The 20-megapixel wide-angle lens will have a 117-degree field-of-view, the 12-megapixel portrait lens will have dual phase-detection autofocus lens, and the dedicated macro lens will be able to capture images of a subject as close as 1.5cm.