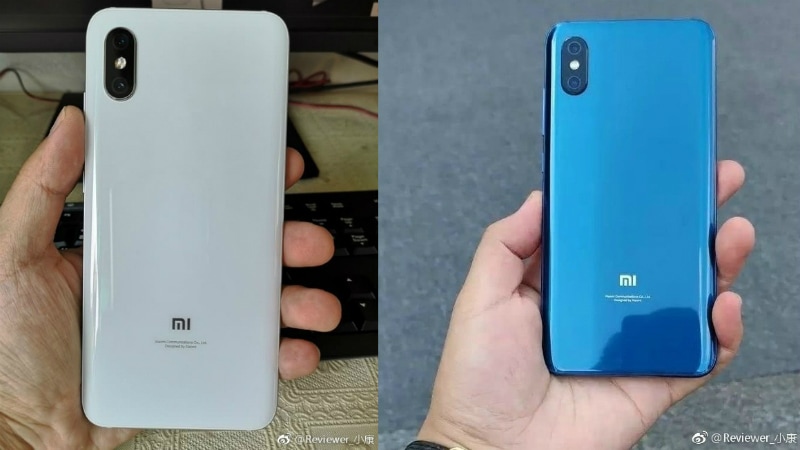 The upcoming Xiaomi Mi Mix 3 is expected to launch on September 15 in China.

Xiaomi is planning to unveil yet another Qualcomm Snapdragon 710-powered smartphone, if certain reports are to be believed. This new smartphone will reportedly be called the Xiaomi Mi 8X and is expected to succeed the Mi Note series. Apart from that, leaks reveal that the Mi 8X will sport a vertically aligned dual rear camera setup and no rear-mounted fingerprint sensor. Instead, it is rumoured to arrive with an in-display sensor. Also, key specifications of the Mi Mix 3 have been outed. To recall, a report had suggested that the Mi Mix 3 is slated for a launch on September 15.

A user on Weibo on Monday gave us a look at alleged live images of the upcoming Xiaomi Mi 8X in Blue and White colour variants. The images show that the phone has a vertical dual rear camera setup, but no fingerprint sensor on the back. Yet another user on the Chinese social networking website has posted a photo of Xiaomi CEO Lei Jun holding a phone that looks similar to the leaked Xiaomi Mi 8X images. It is highly likely that he is holding this upcoming Mi 8X considering the fact that there are no Xiaomi smartphones in the market with a vertical dual camera setup that do not have a rear fingerprint sensor.

Separately, a report from Chinese blog CNMO has revealed key specifications of the upcoming Mi Mix 3, which is supposed to succeed last year's Mi Mix 2. As per the report, the Mi Mix 3 will sport a Samsung QHD+ AMOLED display with COP packaging technology. The handset will be powered by a Qualcomm Snapdragon 845 SoC, and there will be a 20-megapixel selfie camera. Notably, the report claims this will be a pop-up camera meaning that the phone might not get a display notch on top, or a display chin at the bottom.

Earlier this month, the Xiaomi Mi Mix 3 was tipped for a September 15 launch. A promotional poster of the smartphone was also leaked that reveals an extremely slim chin on the bottom of the display.