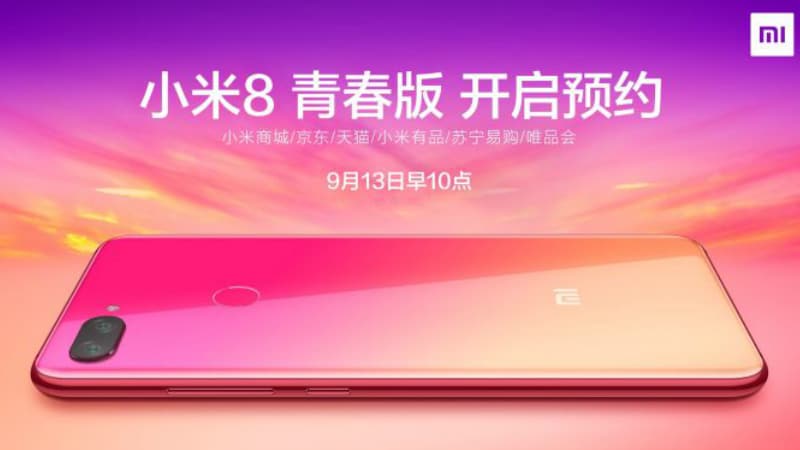 Xiaomi Mi 8X is scheduled to launch on September 19

Xiaomi is largely expected to launch the Mi 8 Youth, or as some are calling it, the Mi 8X smartphone in China next week, and now the company has teased the device revealing the back of the smartphone, sporting a unique colour palette. The Mi 8 Youth is seen sporting a Twilight Gold colour design, and is sporting a dual camera setup as well. There's also a rear fingerprint sensor spotted at the back of the smartphone, sitting top-centre. The smartphone has been leaked on TENAA earlier as well, revealing specifications and design. The Xiaomi Mi 8X is expected to sport a display notch up front, and be powered by the Snapdragon 710 SoC.

Xiaomi's official handle has released this teaser on Weibo, and has also separately confirmed that the reservations have been opened up for all interested users. Interested buyers can reserve the device from online and offline retailers like Xiaomi Mall, Jingdong, Tmall, Xiaomi Youpin, Suning Tesco, and Vipshop. The teaser shows off the rear end of the device. The Xiaomi Mi 8X is seen sporting a unique colour gradient mirror-finish design, that it is calling Twilight Gold. We can see the dual camera setup stacked horizontally and the fingerprint sensor at the rear end as well. The teaser refrains from showing us the front of the device, but a previous TENAA listing suggests that the device will sport thin bezels up front with a display notch up top. This teaser also refutes previous leaks that suggested a vertical dual camera setup at the back in plain Blue and White colour options.

Xiaomi has already launched the Mi 8, Mi 8 Explorer Edition, and Mi 8 SE in China, and it now looks to bring the Mi 8X / Mi 8 Youth to the country on September 19. Previous leaks also suggest that the Xiaomi Mi 8X/ Mi 8 Youth will come with a 3,250mAh battery, 4GB/ 6GB/ 8GB of RAM, Android 8.1 Oreo, 32GB/ 64GB/ 128GB of inbuilt storage, an octa-core SoC, 4G VoLTE, a dual rear camera setup with 4K support, and a rear-mounted fingerprint sensor. The leaked information had hinted at the presence of a 19:9 display with the possibility of a display notch on top. The phone is also expected to sport the latest Qualcomm Snapdragon 710 SoC under the hood. There's also expected to be a variant with in-display fingerprint scanner.