Xiaomi Mi 6 to Launch Wednesday: Price, Specifications, Design and Everything We Know So Far 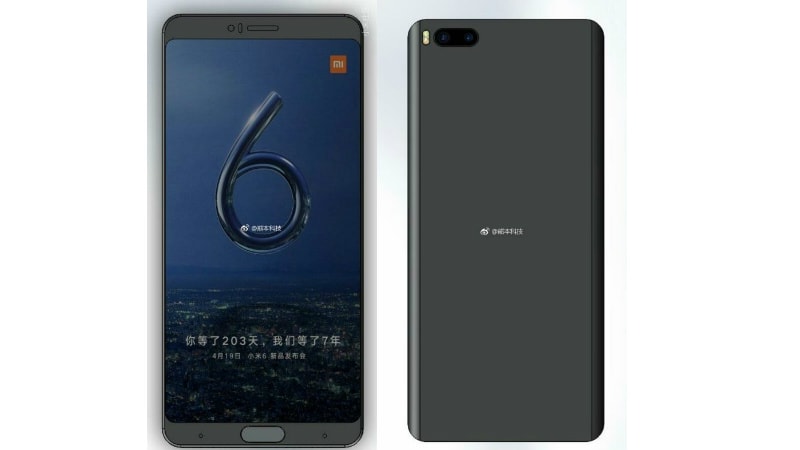 Xiaomi is set to launch the Xiaomi Mi 6 on April 19 in Beijing at the University Of Technology Gymnasium. Ahead of the launch, the device has been leaked on several occasions, and teasers from the company have confirmed few specifications as well. The flagship device is said to sport dual rear cameras, thin bezels, will probably bear 6GB of RAM, and is expected to launch alongside a larger variant - Xiaomi Mi 6 Plus.

Design
Xiaomi Mi 6's press renders have also been leaked on several occasions, but now, fresh images have surfaced online giving us a full look at the front and back. Sketch leaks on Weibo reiterate the dual camera setup that has already been confirmed by Xiaomi, chamfered edges at the back, and thin bezels in the front. The Home Button is visible in the front, underneath which the fingerprint scanner will presumably be housed. More images leaked by a user named Reviewer on Weibo reveals that the power and volume buttons are housed on the right edge, and there are dual speaker grilles on the bottom edge of the device. At the bottom edge, a USB Type-C port is also visible.

Specifications
The big highlight of the Mi 6 is said to be the latest Snapdragon 835 processor integration. It is said to be a big upgrade from the Xiaomi Mi 5, and it is also tipped to sport a dual-edge curved display - at least on one premium variant.

From what we know so far, the Xiaomi Mi 6 runs on Android 7.1.1 Nougat - based on a heretofore unreleased version of MIUI, the company's custom ROM. It will feature a 5.1-inch full-HD (1080x1920 pixel) display. Xiaomi has confirmed that there will be 6GB of RAM on board, however it will be available in several RAM/storage bundles listed above. As for camera, the Mi 6 is tipped to sport a 12-megapixel rear camera with 4K video recording support and an 8-megapixel front snapper capable of 4K recording as well.

Meanwhile, the Mi 6 Plus flagship has been tipped to sport a Quad HD 2K OLED display with dual curved edges and dual rear camera setup, while the Mi 6 will allegedly sport a flat display. Both the flagships are expected to come with Qualcomm's Quick Charge 4.0 technology for fast charging support. The smartphone is also expected to house a 4000mAh battery, although this will likely be for the Mi 6 Plus.