Xiaomi Mi 6 Teaser Released Ahead of Launch on April 19 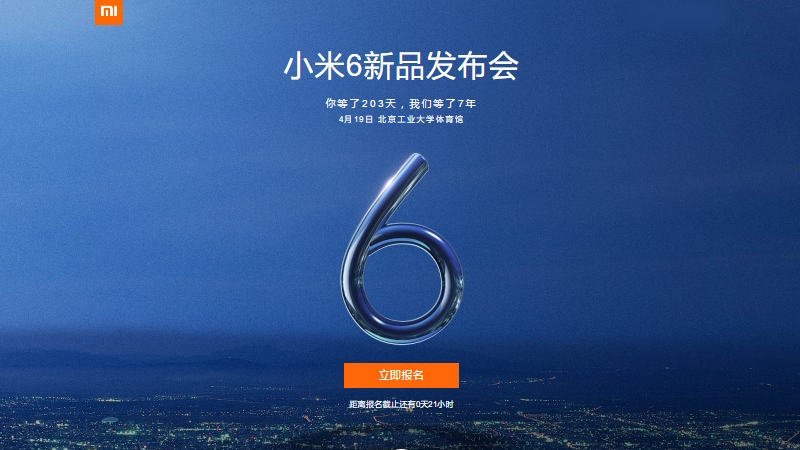 Xiaomi Mi 6 launch date has been announced as April 19, so we are just a few days away from the first official look at this year's flagship Xiaomi smartphone. To keep the buzz going, the Chinese brand has released a teaser that doesn't say much about the upcoming flagship but builds up hype around it. The new Mi 6 teaser comes with the tagline (translated) "You waited for 203 days, we waited for seven years," and it has a backdrop of a cityscape at the beak of dawn. Along with the Mi 6, Xiaomi is also expected to launch the Mi 6 Plus smartphone at the event.

Xiaomi Mi 6 launch event will be held at the University of Technology Gymnasium in Beijing on April 19. At the event, the official price and availability details of the smartphone will be announced.

Running up to the Mi 6 launch, plenty of leaks have already spilled the beans on most of the specification and pricing details of the Mi 6. The big highlight of the smartphone is said to be the latest Snapdragon 835 processor integration. It is said to be a big upgrade from the Xiaomi Mi 5, and it is also tipped to sport a dual-curved edge display - at least on one premium variant.

From what we know so far, the Xiaomi Mi 6 runs on Android 7.1.1 Nougat - based on a heretofore unreleased version of MIUI, the company's custom ROM. It will feature a 5.1-inch full-HD (1080x1920 pixel) display. It is tipped to offer 64GB or 128GB of inbuilt storage as well. As for camera, the Mi 6 is tipped to sport a 12-megapixel rear camera with 4K video recording support and an 8-megapixel front snapper capable of 4K recording as well.

Meanwhile, the Mi 6 Plus flagship has been tipped to sport a Quad HD 2K OLED display with dual curved edges and dual rear camera setup, while the Mi 6 will allegedly sport a flat display. Both the flagships are expected to come with Qualcomm's Quick Charge 4.0 technology for fast charging support. The smartphone is also expected to house a 4000mAh battery, although this will likely be for the Mi 6 Plus.