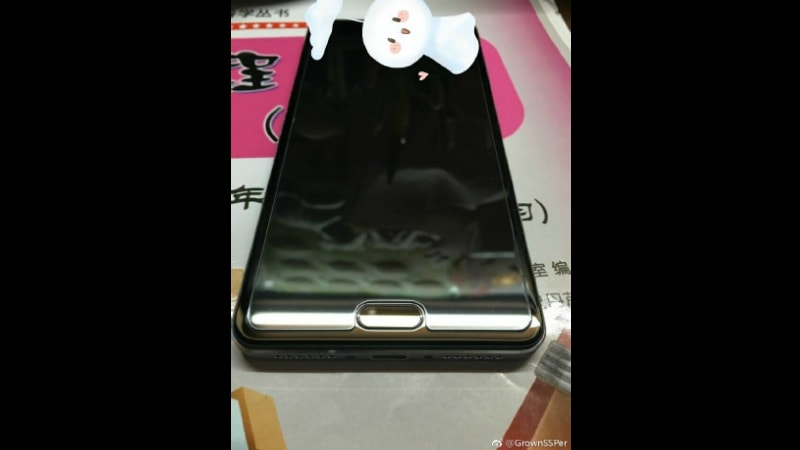 Xiaomi Mi 6 and Xiaomi Mi 6 Plus are set for launch next week, and running up to it, a live image leak of the larger variant has cropped up online. The device's front has been revealed in the image leak, giving away key design details of the device.

The photo was leaked on Chinese social site Weibo, and it shows two speaker grilles on the bottom edge of the device. From the image, it also seems like Xiaomi has taken inspiration from the Mi MIX, and most of the front is occupied by the display, except for the Home Button residing at the extreme edge of the bottom end. There is no brand logo visible anywhere confirming that it's a Xiaomi device, and the smartphone seen is also very different than the previous image leaks seen, and we recommend you take this one very lightly.

Ahead of the April 19 launch i.e. Wednesday, Xiaomi has also rolled out a teaser confirming that the Mi 6 is going to be unveiled in Beijing. The teaser does not reveal much, but leaks have been generous enough to let us know what to expect from the upcoming flagship. The big highlight of the smartphone is said to be the latest Snapdragon 835 SoC integration. It is said to be a big upgrade from the Xiaomi Mi 5, and it is also tipped to sport a dual-curved edge display - at least on one premium variant.

From what we know so far, the Xiaomi Mi 6 runs on Android 7.1.1 Nougat, and will feature a 5.1-inch full-HD (1080x1920 pixel) display. It is tipped to offer 64GB or 128GB of inbuilt storage as well. As for camera, the Mi 6 is tipped to sport a 12-megapixel rear camera and an 8-megapixel front snapper. Meanwhile, the Mi 6 Plus flagship has been tipped to sport a Quad HD 2K OLED display with dual curved edges and dual rear camera setup, while the Mi 6 will allegedly sport a flat display. Both the flagships are expected to come with Qualcomm's Quick Charge 4.0 technology for fast charging support. The smartphone is also expected to house a 4000mAh battery, although this will likely be for the Mi 6 Plus. At the event, Xiaomi is also tipped to launch the Xiaomi Mi MIX 2 alongside.