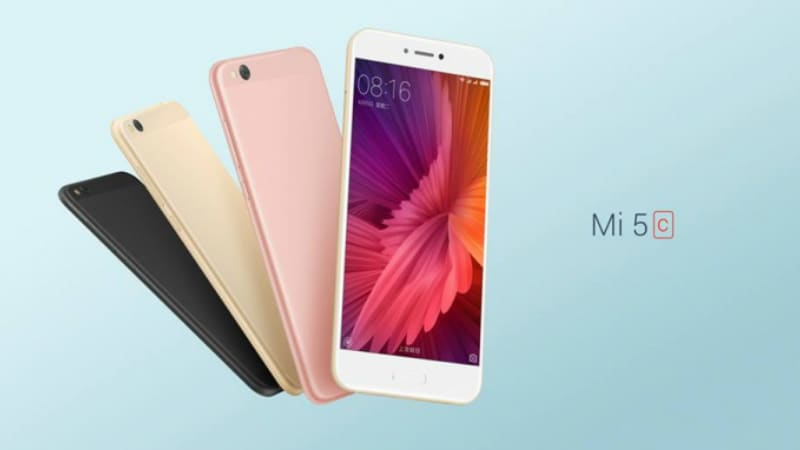 After many leaks, Xiaomi has unveiled the Mi 5c smartphone in China. The device is extra special for the company as it is powered by Xiaomi's first in-house processor, called the Surge S1. The new octa-core SoC is built on the 28nm process, and runs up to 2.2GHz. The Xiaomi Mi 5c sports a metal unibody, and is priced at CNY 1,499 (roughly Rs. 14,600). It will be made available in China on March 3 in Rose Gold, Gold, and Black colour options.

The successor of the Xiaomi Mi 4c, the new Xiaomi Mi 5c will be the first to be powered by the Surge S1 processor, which will be coupled with 3GB of RAM. It features a 5.15-inch full-HD (1080x1920 pixels) curved glass display with a pixel density of 428ppi, 64GB inbuilt storage, and supports dual-SIM (Nano + Nano) cards.

The Xiaomi Mi 5c runs on Android 6.0 Marshmallow-based MIUI 8, and packs a 2860mAh battery with fast charging support. Xiaomi claims that the device is upgradable to Android 7.1 Nougat, possibly arriving as a software update in March. The Xiaomi Mi 5c's fingerprint sensor is underneath the Home Button in the front. Connectivity options include 4G VoLTE, Wi-Fi 802.11 ac dual-band, Bluetooth 4.1, GPS, USB Type-C, a 3.5mm audio jack, and FM radio. The Xiaomi Mi 5c measures at 144.38x69.68x7.09 mm, and weighs 135 grams.

As mentioned, the Xiaomi Mi 5c debuts the company's first in-house processor that has been making headlines for quite a while. Xiaomi has decided to call its first chip Surge S1, and it is an octa-core 64-bit processor that runs up to 2.2GHz at max frequency. The octa-core SoC dissects into four ARM Cortex-A53 cores clocked at 2.2GHz and four other power-efficient ARM Cortex-A53 cores clocked at 1.4GHz.

Xiaomi said that it took only 28 months for the processor to be thought of, produced, and integrated into a smartphone on a large scale. The company even shared GeekBench 4.0 CPU multi-core benchmark and GFXBench Manhattan off-screen benchmark, showing off that the Surge S1 beats the Qualcomm Snapdragon 625 and MediaTek Helio P10 as well as Helio P20 in performance.