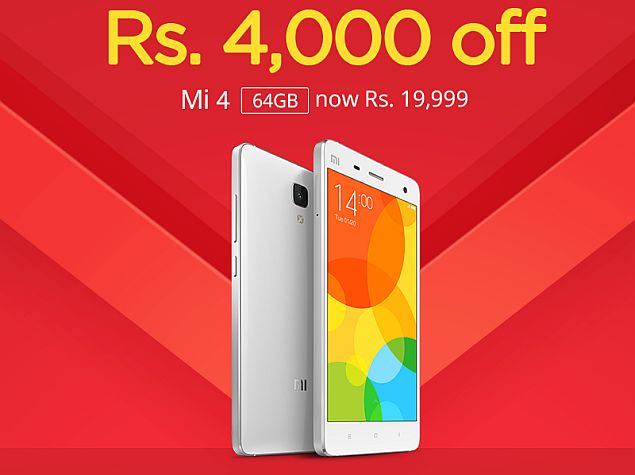 Xiaomi India, as expected, has announced a price cut on Friday. The firm has slashed the price of its 2014 flagship smartphone, the Mi 4, specifically the 64GB model. The smartphone is now Rs. 4,000 cheaper than its launch price.
(Also see: Xiaomi Mi 4 vs. OnePlus One)

The Xiaomi Mi 4 64GB is available now via Flipkart at its reduced price of Rs. 19,999, down from the Rs. 23,999 launch price. Xiaomi India in a tweet confirms that the price cut is applicable starting Friday.

Xiaomi India's move to bring down the price of the 64GB model of the Mi 4 seems to be a move to undercut the price of OnePlus One, another hot-selling smartphone in the same category, which is currently selling at Rs. 21,998 via Amazon India.

To recall, the Xiaomi Mi 4 (Review | Pictures) runs on Android 4.4 KitKat with the company's MIUI 6 skin on top. It is powered by a quad-core Qualcomm Snapdragon 801 processor clocked at 2.5GHz alongside 3GB of RAM. The Mi 4 sports the same 5-inch full-HD display (1080x1920 pixels) found on the Mi 3; although this time the company has used a JDI OGS full lamination display. There is a 13-megapixel rear camera and an 8-megapixel front-facing camera on the Xiaomi Mi 4, with both sporting Sony's stacked CMOS sensors. The smartphone is backed by a 3080mAh Li-ion battery.