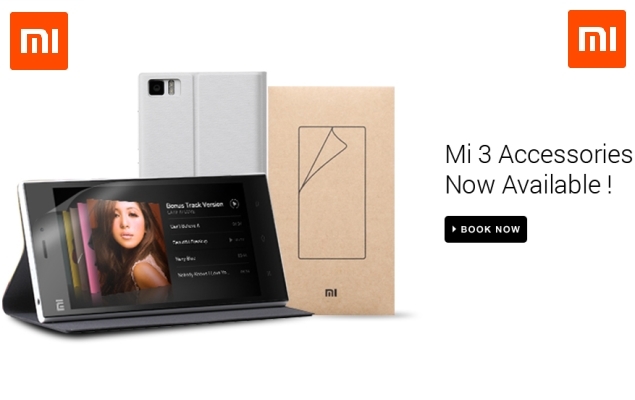 While the Chinese manufacturer Xiaomi is making new sales speed record with its Mi 3 smartphone on Flipkart, the company is set to release two accessories for the smartphone in India.

The Mi Flip Cover and Mi Screen Protector Guard for the Xiaomi Mi 3 have been priced at Rs. 559 and Rs. 179 respectively, and are up for pre-order via online retail partner Flipkart, with an estimated release date of the 5th week of August.

The Mi Flip Cover cases are available in three colour options - Black, Blue and White, and along with the Mi Screen Protector Guard were first spotted by AndroidOS.

Earlier on Tuesday the company organised its fifth flash sale via Flipkart for 20,000 units of Mi 3 smartphone, which Xiaomi claimed were sold out in less than three seconds, 2.3 seconds to be precise, for the third time in a row - according to Xiaomi's Vice President, Hugo Barra, who announced the news on Twitter.

Last week, in its fourth flash sale, the company claimed that it sold 20,000 Mi 3 units in 2.4 seconds. Like the previous occasions, the company has been receiving waves of social media rage following each flash sale the company holds.

Notably, Xiaomi had claimed that the first batch of Mi 3 smartphones in India was sold out within 40 minutes of its availability. The second batch of Mi 3 within five seconds and third flash sale was finished in two seconds.
Affiliate links may be automatically generated - see our ethics statement for details.