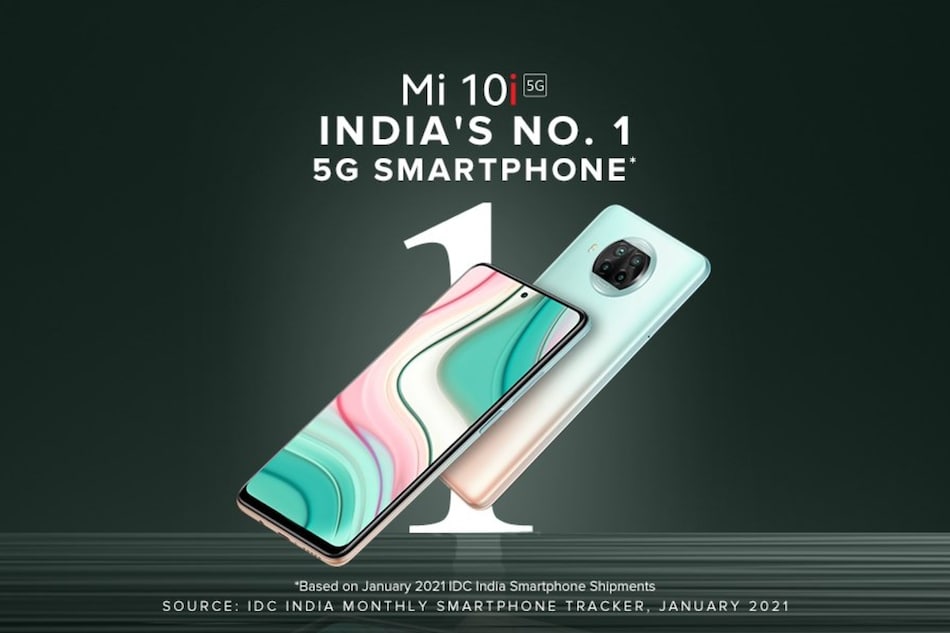 Mi 10i has become the number one 5G phone in India in terms of shipments, Xiaomi revealed on Friday. The company cited IDC India Monthly Smartphone Tracker for its claim. The Mi 10i was launched in the Indian market in January as a watered-down variant of the Mi 10 and Mi 10 Pro. Xiaomi touted that the Mi 10i was specifically customised keeping the Indian audience in mind. The phone features a quad rear camera setup with a 108-megapixel primary sensor and is powered by a Qualcomm Snapdragon 750G SoC. The Mi 10i is essentially the rebadged Redmi Note 9 Pro 5G that Xiaomi launched in China in November.

Xiaomi India's official Twitter account revealed that the Mi 10i emerged as the number one 5G phone in the country. IDC confirmed to Gadgets 360 that the smartphone's leadership position was based on its shipments recorded in January 2021. The market research firm, however, didn't provide any specific shipment numbers or details about the models that came second and third in terms of shipments.

Mi 10i price in India

The Mi 10i comes with MIUI 12 and features a 6.67-inch full-HD+ (1,080x2,400 pixels) display with up to 120Hz adaptive sync refresh rate. It is powered by the octa-core Qualcomm Snapdragon 750G SoC, along with up to 8GB of RAM. The phone also has the quad rear camera setup that houses the 108-megapixel Samsung HM2 primary sensor with an f/1.75 lens, along with an 8-megapixel secondary sensor with an ultra-wide-angle lens, 2-megapixel macro shooter, and a 2-megapixel depth sensor.

For selfies and video chats, the Mi 10i offers a 16-megapixel selfie camera sensor at the front. It is paired with an f/2.45 lens and is backed with software features such as Night Mode and AI Beautify.

The Mi 10i has up to 128GB of onboard storage. It also includes connectivity options such as 5G, 4G LTE, USB Type-C, and a 3.5mm headphone jack. Besides, you'll get a 4,820mAH battery along with 33W fast charging support.

Facebook Rolls Out Holi-Themed Avatar Stickers to Celebrate Festival of Colours: How to Use