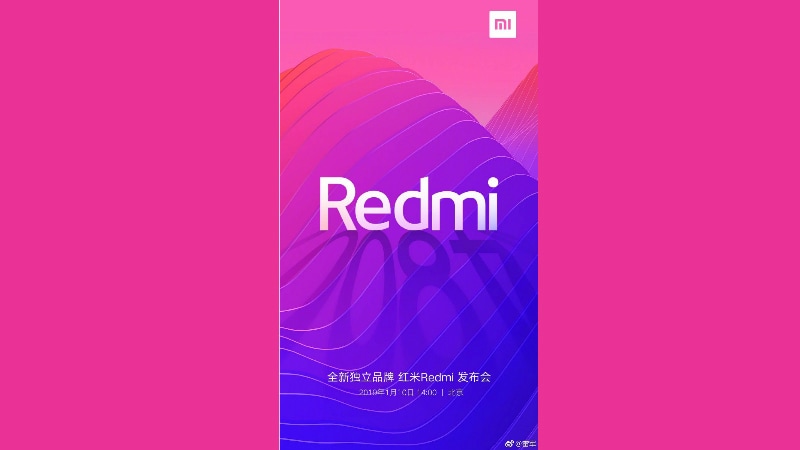 Xiaomi has announced its Redmi brand will now be independent, and has highlighted the differences from Xiaomi's more premium Mi brand. In the same post, Xiaomi CEO Lei Jun revealed the next Redmi launch will be on January 10, and teased it will be the 48-megapixel smartphone the company had teased earlier. To recall, Xiaomi President Lin Bin had said a phone with 48-megapixel camera will launch in January. Subsequent reports suggested that the smartphone will be a part of the Redmi series, and now the company has confirmed a Redmi launch on January 10 in China, and it has indirectly hinted that it will sport a 48-megapixel camera sensor as well.

CEO of Chinese electronics giant Xiaomi, Lei Jun, took to Weibo to announce that a new Redmi device is launching in China on January 10, and also unveiled a new logo. The company has published a poster with the Redmi launch event details, and the photo has the Redmi logo plastered in the centre. The shadow of the logo clearly confirms that this device will sport a 48-megapixel camera sensor at the back. The event will be held in Beijing and start at 2pm local time. Apart from this, the teaser poster reveals little else.

Jun further commented on his Weibo post confirming that this will be a flagship grade smartphone for the Redmi brand. Replying to a user's comment, Jun detailed the reasons for making the Redmi brand an independent one. He said the Redmi series focuses on the ultimate price/performance ratio and is e-commerce friendly while Mi series focuses more on mid to high-end segments and focus on new retail as well. Expect this new Redmi smartphone to be priced aggressively and available online-only.

Previous reports suggest that this smartphone may be called the Redmi Pro 2, and will be powered by the Snapdragon 675 SoC. The smartphone is expected to be the successor to the original Redmi Pro that was launched in China in 2016. The Redmi Pro had debuted with a deca-core Helio X25 SoC and dual rear camera setup. A separate report mentions that the new model will carry the display hole for selfie camera design up front. Precisely, the display hole is said to be placed at the top-left side.

This smartphone is said to compete with the Honor View 20 aka Honor V20 and the Huawei Nova 4 as its premium variant also sports a 48-megapixel camera sensor and a display hole for selfie camera design.