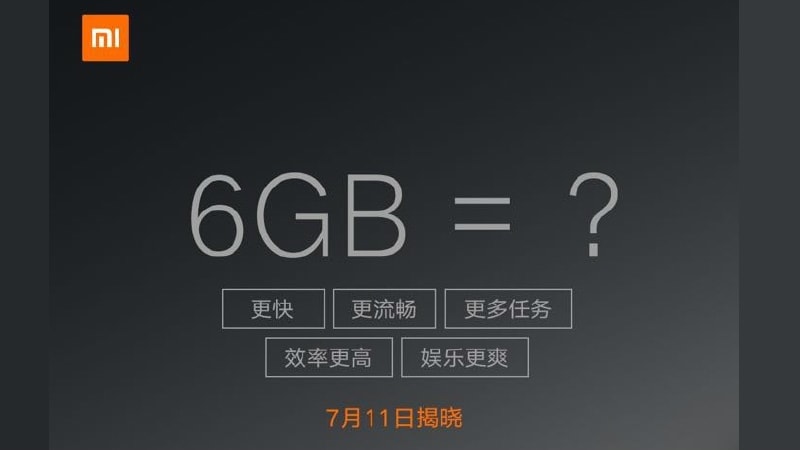 Xiaomi has unveiled quite a few devices this year, and its first half has been quite positive in terms of revenue as well. Now, the company has confirmed another smartphone launch on July 11, and going by the teaser and specification details, it is largely expected to launch the Xiaomi Mi 6 Plus smartphone.

On its official Xiaomi Store Weibo account, the company has announced that is going to launch a new device on July 11. Xiaomi published a teaser poster revealing that the upcoming smartphone will have a 6GB of RAM. This spec is seen on all flagship level smartphones like the Mi 6 or the Mi MIX smartphone launches this year, hinting that this new smartphone will also be strong on paper. The listing was first spotted by Gizmochina.

Furthermore, Xiaomi also released a video teaser revealing more specification details of the smartphone, hinting that it could be the Xiaomi Mi 6 Plus. The teaser reveals that the smartphone will sport a processor from the Snapdragon 800 series, DDR4 RAM, and UFS storage. The video also hints that the display is rather large, hinting further at the Mi 6 Plus variant of the flagship. It is tipped to sport a 3D glass body, and pack a 4000mAh battery. As for optics, the Xiaomi Mi 6 Plus is teased to sport a 22-megapixel sensor which will support 4K recording and come integrated with a smart beauty mode as well.

The Xiaomi Mi 6 Plus has been leaked on several occasions in the past, and this new information reignites hope of a possible launch. However , Xiaomi could very well also launch the Xiaomi Mi MIX 2 smartphone that was recently tipped on a benchmark site, and it is also rumoured to sport a 6GB RAM and Snapdragon 835 processor. The Xiaomi Mi MIX 2 is also expected to sport a large bezel-less 6.4-inch QHD display with 1440x2540 pixel resolution, 19-megapixel rear camera, and a 13-megapixel camera at the front. A 4500mAh battery was also purported to be packed in the smartphone. In any case, these are all speculations, and official details will be unveiled by Xiaomi on Tuesday.

Xiaomi is also expected to launch MIUI 9 before August 16, and we could possibly see its arrival alongside the smartphone launch. What do you think will launch on July 11, Mi MIX 2 or the Mi 6 Plus? Let us know in the comments below.

Airtel Users Will Be Able to Carry Forward Unused Data to Next Cycle Starting August
Paytm Mall Set to Hire 2,000 Employees This Year in Business Expansion