Xiaomi Claims It Has Sold 1 Million Smartphones in India 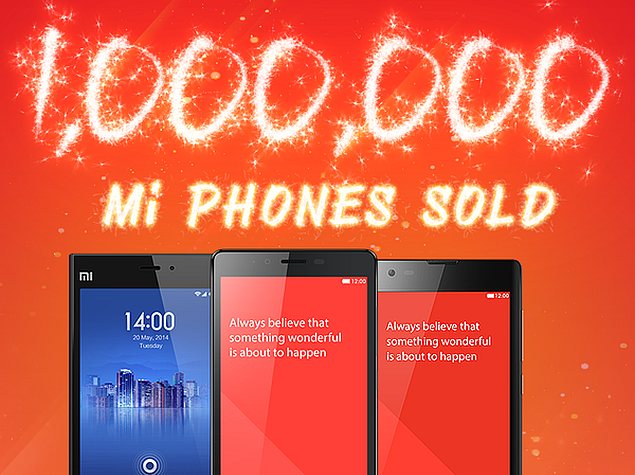 Xiaomi India Head Manu Kumar Jain on Thursday announced that the Chinese smartphone brand had crossed a major milestone in India this month - it has managed to sell 1 million smartphones in the country.

The Chinese manufacturer, which is also known as China's Apple, entered the Indian market only in July with its Mi 3 smartphone, and so the feat is quite impressive as this implies Xiaomi has managed to sell 1 million handsets in under 6 months.

Jain made the announcement on Twitter, with a tweet that listed the three models that have been sold in India since the company's entry into the market - the Xiaomi Mi 3, Xiaomi Redmi 1S, and the Xiaomi Redmi Note.

In dec, we reached a major milestone - 1 mn phones sold in India! Thank u for your love and support. @MiIndiaOfficial pic.twitter.com/LSXijujP87

The firm's novel flash sale system, though initially scorned, quickly found adopters lining up to grab a smartphone for themselves. While the first flash sale in the Indian market for the Mi 3 saw 100,000 registrations, the company saw its entire inventory of 10,000 units on Flipkart go out of stock within 40 minutes. The second sale showed the demand for the smartphone, and the willingness to use Xiaomi's flash sale system, with 10,000 units claimed to go out of stock in 5 seconds.

The Xiaomi Mi 3 flash sales set a trend in the Indian market, and while other manufacturers didn't pick up the system until Micromax this month with the Yu Yureka smartphone, they have become much more candid revealing the number of units they've sold, if only to ensure consumers don't associate such figures only with Xiaomi.

Xiaomi next launched the Redmi 1S in India, and at its sub-Rs. 10,000 price, appealed a great deal more to consumers in the country. The Redmi 1S smartphone has seen several sales since its first flash sale in September, with each being accompanied by a claim that so many units went out of stock in so few seconds. Perhaps the most dramatic of these sales was in October, where 1,00,000 Redmi 1S smartphones went out of stock in 4.2 seconds.

The third smartphone to be launched in India by Xiaomi was the Redmi Note (3G variant), which saw its first flash sale on December 2 and had 50,000 units go out of stock in 6 seconds.

Of course, all is not rosy in India for the Chinese smartphone brand, with Xiaomi recently being slapped with an injunction order by Delhi High Court that banned it from important and selling its handsets in the country till February 5, the date of the next hearing. The injunction was passed on a plea by Ericsson to stop sales of Xiaomi smartphones in India as they infringed on eight of its patents (including Standard Essential Patents) pertaining to AMR, EDGE and 3G technologies.

Xiaomi however one a reprieve shortly after, and was permitted by the Delhi High Court to import and sell its smartphones till January 8 in India that used Qualcomm chipsets, as these did not infringe on Ericsson's patents. This saw the company bring back the Redmi 1S on sale this week, and announced the start of sales of the Redmi Note 4G next week.

HTC Sense 7 UI With Android 5.0 Tipped to Launch With HTC Hima in March
Ministry of External Affairs Most Popular on Social Media