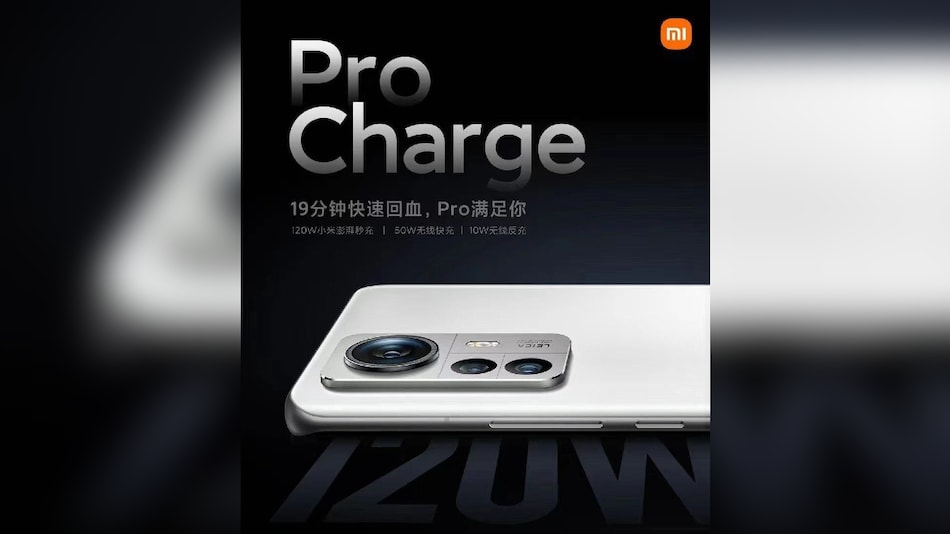 Xiaomi 12S Pro will come with 120W wired fast charging technology that is claimed to fully charge the smartphone in 19 minutes. Alongside the 120W wired fast charging, the smartphone will also come with 50W wireless and 10W reverse wireless charging, the company CEO Lei Jun has confirmed. The news comes when Xiaomi is preparing to launch the Xiaomi 12S series in China. It will also launch the Mi Band 7 Pro as well as Xiaomi Book Pro 2022 that is teased to pack a 4K OLED display.

As per a post by Jun on Weibo, the Xiaomi 12S Pro will come with 120W fast charging technology. This technology will offer two modes. In the first ‘fast charging' (translated) mode, the phone will be charged in 19 minutes, as per the company. There is a ‘constant temperature mode' (translated) that will charge the phone in 25 minutes offering a ‘stable low temperature performance'. Apart from that, the phone will also offer 50W wireless and 10W reverse wireless charging to juice up earphones and other smartphones with wireless charging feature.

Xiaomi 12S Ultra, Xiaomi 12S Pro, and Xiaomi 12S are set to launch on July 4 at an event that is scheduled to take place at 7pm CST Asia (4:30pm IST) on July 4 and will be livestreamed through Xiaomi's social media channels. The Xiaomi 12S series will be the company's first range to come with Leica optics. The Ultra model will come with Sony IMX989 camera sensor — a first in the industry. It has been speculated that this 1-inch sensor will have a 50-megapixel resolution.

Meanwhile, Xiaomi will also launch the Mi Band 7 Pro as well as the Xiaomi Book Pro 2022 with a 4K OLED display and Dolby Vision as well.