The information about camera sensors was shared by Xiaomi CEO Lei Jun on Weibo. 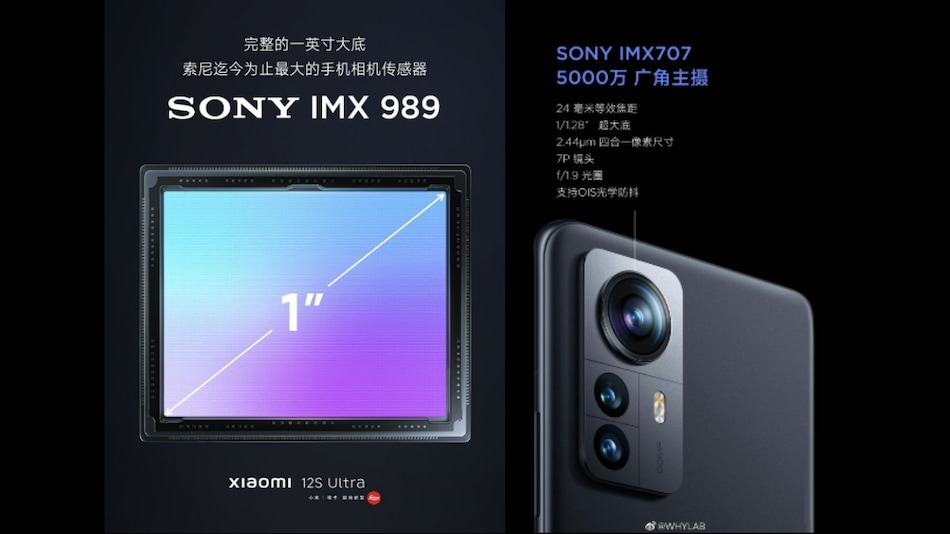 Xiaomi 12S Ultra will get a Sony IMX989 sensor and the Xiaomi 12S will sport a Sony IMX707 sensor. It has been speculated that this 1-inch sensor will have a 50-megapixel resolution and the Xiaomi 12S Ultra will be the first smartphone to have it. Furthermore, the sensor in Xiaomi 12S also has a 50-megapixel resolution, 1/1.28-inch size and it will be paired with a 7P lens with an f/1.9 aperture. The smartphones will be launched on July 4.

The information about Xiaomi 12S Ultra sporting a Sony IMX989 comes from Xiaomi CEO Lei Jun. He posted a string of updates on Weibo announcing that Sony IMX989 along with Leica and Xiaomi will set a new standard in smartphone imaging. In one of the posts, he says that the Xiaomi 12S Ultra's main sensor will have 172 percent greater photosensitive area, 76 percent greater photosensitive capacity, 32.5 percent increase in camera speed, 11 percent increase in startup speed as compared to iPhone 13 Pro Max.

The executive also mentioned that the Sony IMX989 has been co-developed by Xiaomi and Sony, and both companies bore equal share of the production of the sensor. Xiaomi 12S Ultra will be the first smartphone to get it. Post launch, “it will be open to domestic counterparts” (translated) to be used in their phones. While there is no further information about the sensor, a previous report speculated that the 1-inch sensor will have 50-megapixel resolution.

Separately, Lei Jun also announced that Xiaomi 12S will get an IMX707 sensor. The executive posted that it will have 48 percent larger photosensitive area and 49 percent greater light input as compared to the Sony IMX766. The details of the main camera were shared by tipster WHYLAB. As per his post, the Xiaomi 12S will come with a 50-megapixel Sony IMX766 primary sensor paired with a lens that has 24mm focal length, 1/1.28-inch size, 7P lens, f/1.9 aperture, and optical image stabilisation (OIS).

Xiaomi 12S Ultra, Xiaomi 12S Pro, and Xiaomi 12S are set to launch on July 4, the Chinese company has announced.