Apple will ship the first Macs with A12Z chips by the end of this year, and will complete the transition in two years. 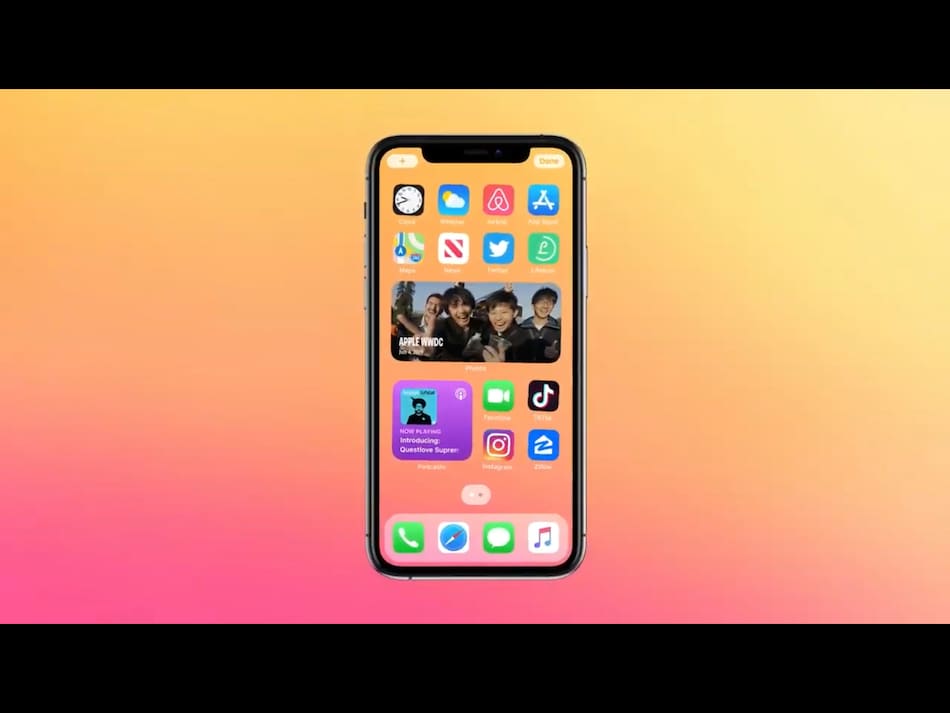 WWDC 2020 keynote began with Apple CEO Tim Cook talking to the audience via a live stream. He began the keynote by talking about the Black Lives Matter movement and Apple's initiatives to support the movement. Tim Cook also spoke about the Covid-19 pandemic and he lauded the efforts of healthcare workers at the frontlines. The entire WWDC 2020 event is being held online due to the pandemic. Apple's SVP of engineering Craig Federighi then took to the stage to talk about iOS 14.

The first feature he announced for iOS was App Library. This is essentially a folder system for iOS that allows you to organise apps in neat folders. This can be accessed by swiping right and reaching the last screen. You can also hide certain app pages. App Library allows you to quickly search for apps too, via a search bar at the top.

The next feature Federighi announced was widgets for iOS 14.These widgets are better organised than before and you can even add these to the home screen. This dramatically changes the way your iOS home screen looks, something that has been pretty much the same since iOS was first launched. You can also add a Smart Stack widget that automatically shows you relevant widgets.

Apple also announced a new design for Siri and a new app called Translate that supports completely offline translation for languages. It has a conversation mode in landscape that makes it easy to see translations.

The next big feature announced was updates to Messages. The main feature is the ability to pin messages in the stock messaging apps. There are also lots of new Memoji customisation options including a mask for your Memoji. iOS 14 also finally adds inline replies to iMessage. You can reply to individual messages, mention specific people, get notified only when you are mentioned, and a new group message icon.

You now have guides in Apple Maps, and cycling directions in iOS 14. Another nifty feature is EV routing, which will help you avoid range anxiety in electric cars by picking the best path and helping you find charging stations, Apple said.

Then Federighi spoke about CarPlay, which is Apple's platform for in-car entertainment. Another feature is allowing you to use your iPhone as a car key. This will work with a BMW car launching next month, and this feature will work on iOS 13 devices too. This feature relies on the U1 ultra wideband chip.

The next major feature announcement for iOS 14 was about the App Store. When you don't have an app you need, you can use a feature called App Clips to quickly run an app without installing it. These app clips will only stay on your iPhone as long as you need them. App Clips are easier for businesses that have an iPhone, and these can be created by developers even if they don't have an iPhone apps.

Federighi then spoke about iPadOS 14. This has a new feature called Sidebar that makes better use of the available screen space with a macOS like sidebar where you will find options for quick access. There is a toolbar at the top for calendar that gives you additional options. In general the theme is to make better use of the iPad's large screen.

There's a new Siri button that appears at the bottom right to allow you to complete actions that you need like adding reminders quickly. Incoming calls on iPad or iPhone will not take over the entire screen -- they will show up at the top in a small window that is easy to dismiss. There is improved search on iPadOS, which allows you to search within apps, or the Web. This is much like Spotlight on the Mac.

AirPods now have a new feature called automatic switching, which allows you to switch between multiple Apple devices instantly. If you get a call on your iPhone while watching a video on Mac, AirPods can auto switch to the iPhone and back once your call is done. AirPods Pro is getting spatial audio for more immersive sound. Spatial audio works with 5.1, 7.1, and Dolby Atmos audio.

The next important development is around watchOS 7. We're getting support for multiple complications that lets you add different widgets from the same app in your watch face. There's a fresh Chronograph watch face too. You can also share Watch Faces now with your friends, get it curated from the App Store, or via websites or social media. You can now track dance workouts, the activity app has been redesigned and is called Fitness. Apple Watch is also getting support for sleep tracking and a new feature called Wind Down, that helps you get to bed at a set time. You can set up a set of shortcuts to run during this time, be it meditation or the morning alarm. Apple Watch tracks your sleep using a machine learning model, and automatic detection for hand washing. It tells you if you have washed your hands for 20 seconds, which is the recommended time to thoroughly wash your hands.

Federighi next spoke about new privacy features coming your way. You have the option to share approximate location instead of precise location with apps. If your mic is being used to record, you'll see it right in the status bar. Tracking control is another feature that will require apps to ask for your permission for tracking your data across websites or apps. Every developer will self-report their privacy practices and you will be able to see what data an app collects on the App Store.

The Home app has been redesigned to add better automations and there is a new feature called adaptive lighting to let you change light colours via the home app. It can adapt to current lighting conditions and adjust the light accordingly. HomeKit cameras will provide face recognition and announce who is at the door via face recognition too. All home cameras are integrated with tvOS 14.

Now you can instantly resume your game where you left off on the Apple TV. This is via multi-user support for games. You also get support for Xbox Elite 2 and Xbox Adaptive controllers for Apple TV gaming. AirPlay sessions show up in picture in picture windows on Apple TV and your family can share their phone screens to the Apple TV. Foundation. Apple also announced that the Foundation TV series, based on Isaac Asimov's novels will be on the service in 2021.

Big Sur is the name of macOS 11. You are getting a new design here with redesigned buttons, a Control Centre interface for basic controls such as Wi-Fi, dark mode, night shift, etc. There are new app icons for all default apps such as Finder. You also get redesigned apps such as Podcasts, Calendar, etc. The menu bar is translucent and menu layout has been updated too. Messages on Mac is getting new features such as better search, a redesigned photo picker to make sharing photos and videos easier. You also get Memoji on Messages on Mac. iMessage effects finally play on the Mac and the groups enhancements. Apple Maps is redesigned on the Mac and you can create your own guides here too and check your airport gate with indoor maps and explore cities via the Look Around features.

Then Federighi spoke about Catalyst, which allows developers to create Mac apps from their iPad apps. Developers can optimise their apps for the high resolution displays on Macs. Mac Catalyst technology has been used to develop Messages and Apple Maps on Mac, Federighi said.

On to Safari on Mac. This year, Safari's JavaScript performance is better and page loading is 50% faster than Chrome according to Apple. It's also getting new privacy features and you can click on a privacy report button to understand how you're being tracked. Safari also tracks if your passwords have been breached. Safari also allows you to give extensions access to your data just for the day, or all the time. Safari also has customisable start pages. Safari also makes it more efficient to find open tabs. All tabs have favicons by default, and you can hover over tabs to see a preview of the page. New Safari has built-in translation too, which allows you to translate web pages without using Google Translate.

Having succeeded in building high-performance chipsets for iPhones, Apple is now switching its Macs to its own A-series chips. This development started with the A5X and subsequent X improvements to the chips used in iPads. On the Mac you will get a family of SOCs designed specifically for Mac. Apple said it has used Xcode to optimise its first-party apps for Apple chips on Macs, and some of these apps are advanced such as Final Cut Pro. Apple has created Universal 2 to make it easy to port apps to macOS running on Apple silicon. Microsoft and Adobe are working on bringing on Office and Creative Cloud apps to Apple chipsets on macOS. Federighi said he was using Macs with Apple silicon to demo things during WWDC 2020.

We also saw demos of apps such as Lightroom and Photoshop, running on Apple silicon on Macs. FCP can add effects to videos in real-time. It can play 3 streams of 4K footage at the same time on the A12Z chip that is designed for Mac. macOS Big Sur also has Rosetta and Virtualisation features which will be useful for developers.

This is also good news for games as controllers are supported on Mac and existing games can be run on the Mac. Virtual machines are quite easy to run on Macs, so you can access Linux, and run iPhone and iPad apps on Mac too. You can download iOS apps on the Mac App Store, and most apps will need no changes, Federighi said. Of course you need to use a Mac with Apple silicon for this, and those are not available right now. For developers to get started, there is a quick start guide and private developer forums. Developers will get a 16GB RAM Mac Mini with an A12Z SoC to develop apps for this platform. The first Macs with the A12Z chip will ship by the end of the year and Apple will complete this transition to A-series chips in two years.

All OS releases will be available as a developer preview today, and in public beta in July, with final releases in the Fall, which is September and October 2020.