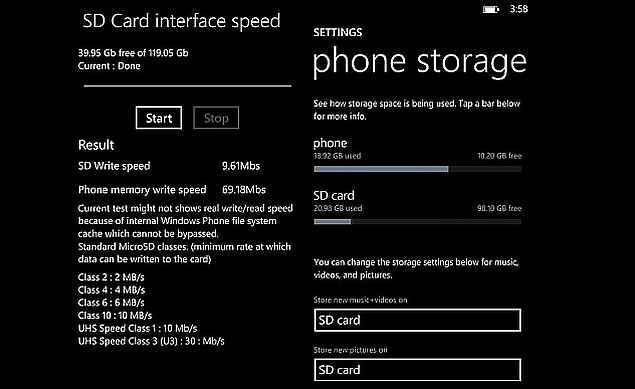 A hidden gem has been found inside the Windows Phone 8 operating system by a user, as he claims to have successfully tested a SanDisk 128GB microSDXC external card in his Nokia Lumia 1520.

The user, named as NoRomBasic, to support this information has also posted an image (see above) showing the 'phone storage' option under the 'Settings' tab. The page, along with the internal phone storage, shows the SD card storage, in which 20.98GB is seen as used and 98.10GB is seen free.

NoRomBasic additionally mentions better benchmark results and smooth stutter-free recording of videos. "What I can tell you is that it benches about 20% faster than the SanDisk Ultra microSDXC 64GB (I have a couple of those as well and that was in my 1520 until the friendly UPS Guy delivered the 128GB card today)," he said in the Wpcentral forum. "I did record about 5 minutes of video last night and had no stuttering issues, as well as played back an episode of Firefly formatted in 720p low-compression WMV format. Card seems to work just fine," he added.

However, it has been pointed out that 1080p full-HD video recording is still not smooth as the user states "For my purposes it works more than well enough and I really do want the space so I'd still say the card is a good buy unless you are heavy into 1080p motion video recording."

In an image posted by the user, it has been also revealed that the writing speed for the SanDisk Ultra microSDXC 128GB card on the device is about 9.61Mbps.