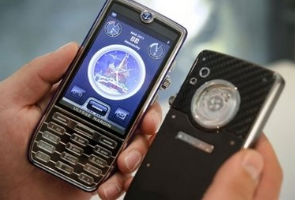 Highlights
With the younger generation opting to use their smartphones to tell time, the watch-making industry is being forced to get smart and high-tech to recapture consumers.

On show at the industry's biggest watch and jewellery fair Baselworld this year are not only diamond-encrusted mechanical watches with complex movements, but an increasing number of timepieces that combine with the smartphone.

Some watchmakers unveiled luxury phones that incorporate mechanical watches, others were featuring watches with touchscreens. Japanese digital watchmaker Casio premiered watches that are able to communicate with smartphones.

Gonet and his business partners decided to create an electronic wristwatch with a touchscreen, which "lets people download photos, personalise their watch face," although it does not have the telephone function.

"We thought of making this watch to recreate the link between horlogery and young people," he explained.

Asked if Apple could be a potential competitor, Gonet said that his company has taken out a patent for a virtual mechanic movement.

"The first thing we did was a feasibility study, and we found that there was no patents for this. It was surprising but it convinced us to go into it," he added.

His company is not the only one tapping the smartphone market.

Ulysse Nardin, a Swiss luxury watchmaker, launched what it claimed is "the world's first luxury hybrid smartphone," integrating a mechanical watch rotor into the mobile phone.

The automatic rotor also creates energy to provide additional power to the phone.

Bobby Yampolsky, co-founder of UN Cells which make the phones for Ulysse Nardin, admitted that it is insufficient to act as the sole power supply for the phone.

"If you wind it for four, five minutes you can make about a 30 second phone call or a few texts," Yampolsky told AFP.

Nevertheless Yampolsky believes that such hybrid phones are the way forward.

"The philosophy for us when we made this phone is, we asked ourselves, what do men have as a status symbol? We have our watches and we have our cars.

"This is basically the Ferrari that you can bring into a restaurant and put on the dining table," said Yampolsky.

But Casio, a long-term player in the watch industry that championed the quartz technology which almost brought about the demise of the mechanical watch, believes that there is still a place for the wristwatch.

This year, it introduced a watch that communicates with the mobile phone.

Casio's managing director Hiroshi Nakamura explained that if the mobile phone rings during a meeting, a tap of the watch would stop the ringing.

Likewise, an email arriving on a smartphone would also prompt a message on the wristwatch that a mail has been received.

"You don't always keep a mobile phone in your hands, you'll put it in your bag. So it's easier when you're receiving a call to just tap on the watch," Nakamura told AFP.

"We don't think that the iPhone will take the place of a watch. We see more possibilities for the watch," he added.

"If you have a Bluetooth watch and a smartphone then you don't have to adjust the time when you're travelling," he noted.

Casio's latest watch will be available by the end of the year, with a launch due in the domestic market before broadening to other markets.
Comments