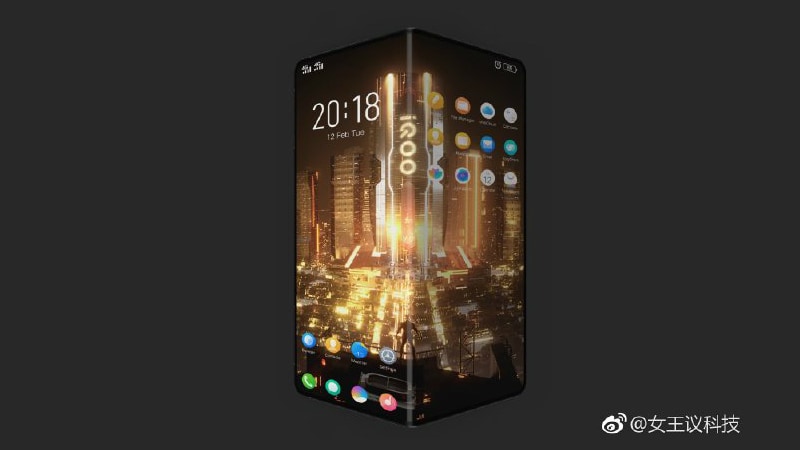 Just a few days ago, Vivo unveiled its new sub-brand iQoo. The sub-brand is touted to keep its focus on futuristic premium products, and the first phone to launch under the Iqoo branding could be a foldable phone. Photos of the first alleged iQoo phone have been leaked on Weibo, and the pictures suggest that the device will be a foldable smartphone that converts into a tablet when unfolded. To recall, Samsung is said to be planning to unveil a foldable phone next week, and recent leaks suggest that the phone will sport a fold-in design.

The photos of the upcoming iQoo phone have leaked on Weibo. The device, when folded, can be used as a smartphone and when unfolded, reveals another screen to turn it into a tablet. The display, in the smartphone mode, shows four icon columns on the screen, giving us a fair idea of the overall real estate of the device.

The alleged leaked photos suggest that there will be negligible bezels up front, with no holes for the selfie camera. This suggests that Vivo may embed it under the screen or opt for a pop-up mechanism.

Apart from the photos, there's little else that the tipster has revealed. The phone is tipped to be priced around CNY 5,000 (roughly Rs. 53,000), and may arrive soon. However, there has been no official word from Vivo or iQoo regarding the device.

Talking about the foldable phones, Samsung is set to unveil its first foldable smartphone at the Galaxy Unpacked 2019 event on February 20 in San Francisco. Based on the recent leaks, the phone is expected to have one screen when folded, and will reveal two more screens inside when unfolded like a book.