Vivo Z6 5G is claimed to feature PC-grade cooling, said to reduce temperatures by up to 10 degrees Celsius while gaming. 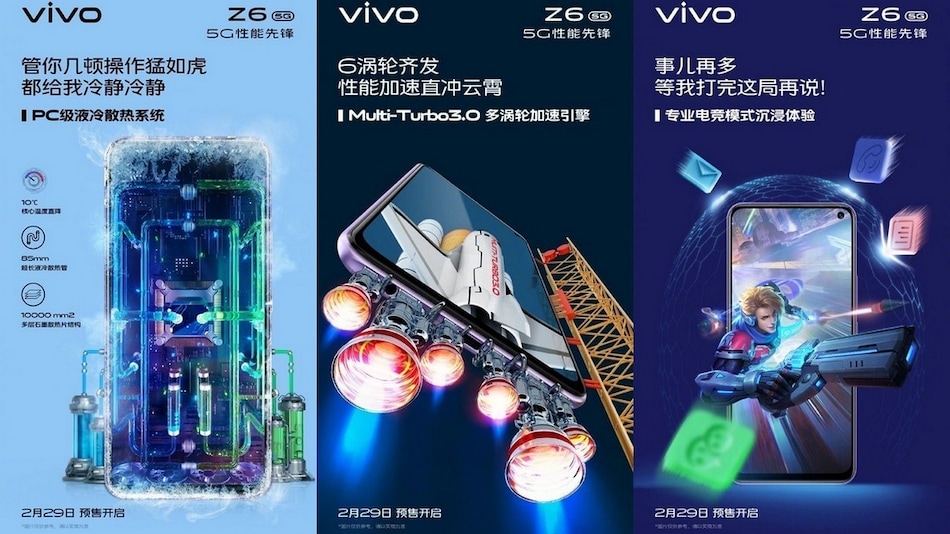 Vivo Z6 5G is an upcoming smartphone from the Chinese smartphone maker, being teased bit by bit until it goes on pre-sale from February 29 in China. Thus far, it has revealed it will sport 5,000mAh battery, 44W fast charging, and that it is powered a Snapdragon 765G SoC, and will feature PC grade liquid cooling. Now, Vivo has further detailed the liquid cooling on the phone, and also revealed the features like Multi-Turbo 3.0 acceleration engine and a professional gaming mode.

As per a company post on Weibo, the Vivo Z6 5G is said to feature a multi-layer graphite heat sink that covers a total area of more than 10,000 square millimetres. It also has a liquid cooling tube which is 85mm in length. Vivo claims that just like with desktop computers, it has used super thermal conductive gel for better heat dissipation. Vivo states that this combination can reduce temperatures by up to 10 degrees Celsius. This translates to longer gaming sessions without the phone heating up too much, which is a common problem with mobile gaming these days.

In another post on Weibo, Vivo claims there are also some software optimisations made in the phone. Apart from Multi-Turbo 3.0 acceleration, the company is also touting a 'professional gaming mode' on the Vivo Z6 5G, keeping notifications aside and not having them pop up in-game. To recall, Vivo first announced the upcoming launch and pre-sale of the smartphone last week. There is no information on the pricing of the Vivo Z6 5G as of yet.

Thanks to a TENAA listing, more details about the Vivo Z6 5G have been tipped. It is said to come in two RAM variants, 6GB and 8GB. The listing also showed the Vivo Z6 5G will have three storage options, 64GB, 128GB, and 256GB, apart from featuring a 6.57-inch display with a full-HD+ resolution of 1080×2080 pixels. The listing pointed at the presence of four cameras on the back and one on the front. The selfie shooter will be placed on the screen in a punch hole design, something official images also confirm.