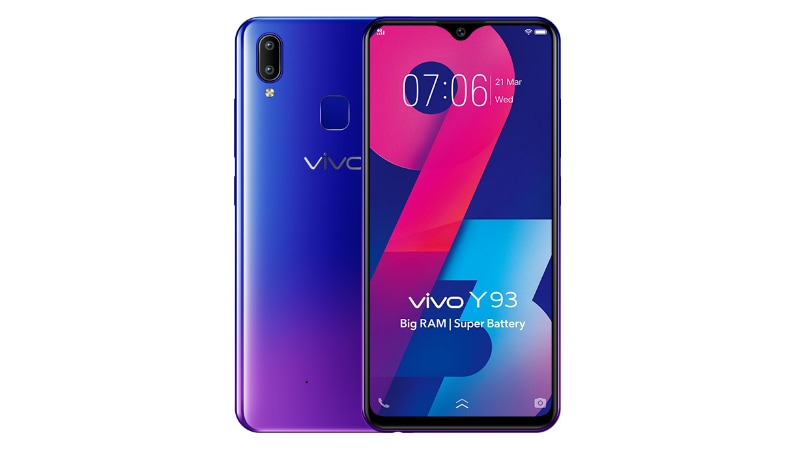 Vivo Y93 looks set to launch in India. While Vivo launched the original Y93 in China early last month, the model that is coming to the Indian market isn't similar to its China version. Instead, the new model looks closer to the Vivo Y93s that was launched in China just last week. The India version of the Vivo Y93 has already been listed on the official Vivo website. Key specifications of the Vivo Y93 include an HD+ Halo FullView display, MediaTek Helio P22 SoC, and a dual rear camera setup comprising a 13-megapixel primary sensor. The smartphone also sports the list of signature Vivo features such as Jovi Smart Scene and Smart Split.

The official Vivo India website has listed the Y93 without revealing any price and availability details. The online listing shows the smartphone in Stary Black and Nebula Purple colour options. It also highlights that the specifications of the Vivo Y93 in India aren't in line with the what arrived with its China version.

The dual-SIM (Nano) Vivo Y93 runs Android 8.1 Oreo-based FunTouch OS 4.5 and features a 6.2-inch HD+ (720x1580 pixels) Halo FullView display with a 19:9 aspect ratio. Under the hood, the India version of the Vivo Y93 has an octa-core MediaTek Helio P22 SoC, coupled with 4GB of RAM. This is unlike its China version that was launched with an octa-core Qualcomm Snapdragon 439 SoC but matching the hardware of the Y93s that has the same chipset. The smartphone also has 32GB of onboard storage that is lower than the 64GB storage available on its China version.

In terms of connectivity, the Vivo Y93 has 4G VoLTE, Wi-Fi, Bluetooth v5.0, Micro-USB with OTG support, and FM radio. Sensors on board include an accelerometer, ambient light sensor, e-compass, gyroscope, and a proximity sensor. Besides, the smartphone packs a 4,030mAh battery and measures 155.11×75.09×8.28mm.

The official listing of the Vivo Y93 in India was first spotted by tech blog GizArena.