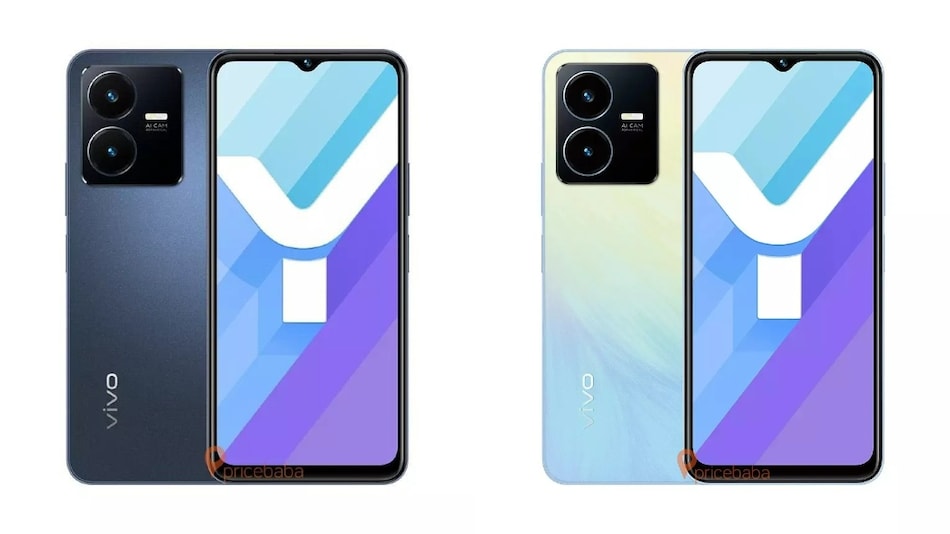 Vivo Y22s is tipped to come in two colour options

Vivo Y22s alleged images and specifications have been leaked by a tipster. The smartphone is tipped to sport a display with waterdrop notch for the front camera, a large chin, and a dual camera setup on the back located in a square module. The smartphone has already been spotted on multiple certifications websites including US Federal Communications Commission (FCC) database and on a partnered website. It is expected to launch as a successor to the Vivo V21 series and may be launched later this month.

Tipster Paras Guglani in collaboration with Pricebaba revealed that the Vivo Y22s will be a 4G phone and it will come in Blue and Black colour options. It is tipped to run FuntouchOS 12 and feature a 6.55-inch HD LCD display. The phone will reportedly be powered by a Qualcomm Snapdragon 680 SoC. The chipset is said to be coupled with 8GB of RAM and 128GB internal storage.

For photos and videos, the Vivo Y22s is claimed to come with a 50-megapixel primary sensor and a 2-megapixel secondary camera alongside an LED flash. On the front is said to be an 8-megapixel camera for selfies and video calls. The device will reportedly pack a 5,000mAh battery with support for 18W fast charging. It could come with a side-mounted fingerprint sensor.

As mentioned, the Vivo Y22s has already been spotted on various certification platforms including the US FCC database with the model number V2206. A smartphone with the same model number was also listed on a partnered website. It was reported that Vivo may launch the phone in August.

An earlier report suggested that Vivo Y22s is expected to offer a 6GB + 128GB storage configuration option and Summer Cyan as well as Starlight Blue colours options. It is expected to succeed the Vivo Y21 that was launched in India in August last year.

Tesla to Launch Humanoid Robot Prototype This Year; Could Be Cheaper Than a Car in the Future, Elon Musk Says