Vivo X60s was first mentioned in a Bluetooth SIG website back in June and at the time, the listing showed the moniker which it doesn’t anymore. 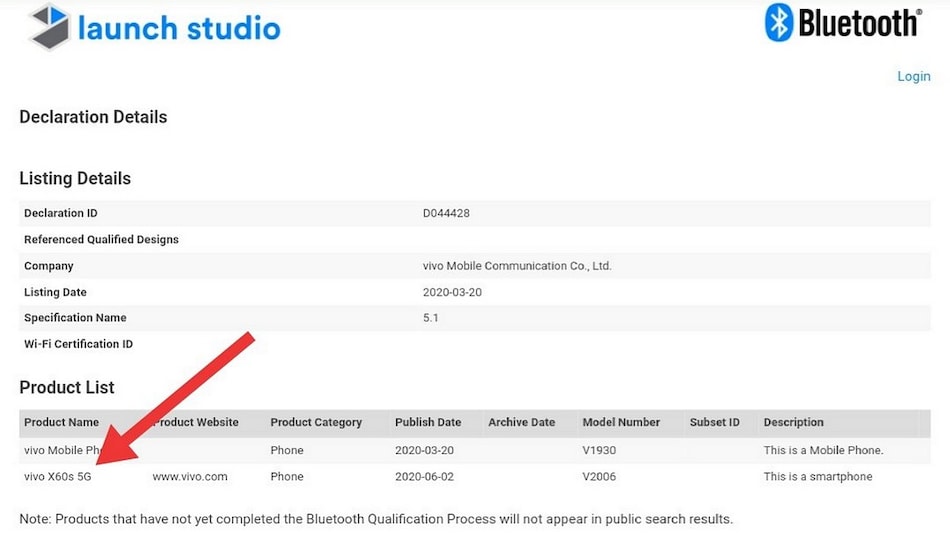 Vivo X60s is said to have Bluetooth 5.1 support

Vivo X60s has been reportedly spotted online on a certification website, as well as on a benchmarking website. Both the websites carry the same model number - V2006/ vivo 2006 – which is said to be the Vivo X60s. Back in June, a Bluetooth SIG listing of the phone linked this model number to the X60s moniker. The phone is expected to be part of the upcoming Vivo X60 series that will be the follow up to the recently released Vivo X50 series.

As per a report by Dealntech, the Vivo X60s has been spotted on Danish UL (Demko) certification website with model number V2006. It shows that the phone supports 33W fast charging (11V/ 3A). Besides this, the website does not reveal any more information.

The model number vivo 2006 was also spotted in a Geekbench listing which shows the presence of Android 10, 8GB of RAM, and an octa-core Qualcomm processor. The single-core score is 637 while the multi-core score is 1985. While the processor has not been named in the listing, it is expected to be the Snapdragon 765G. The listing is from July 27 and does not show any more details of the alleged Vivo X60s.

Back in June, an alleged Bluetooth SIG listing that was first spotted by Twitter tipster Sudhanshu was the first mention of a Vivo X60s. The listing showed the presence of Bluetooth v5.1 and no other key specifications. Interestingly, the same listing does not show the Vivo X60s name anymore and just shows “vivo Mobile Phone”.

To sum up, the Vivo X60s is expected to be powered by the octa-core Snapdragon 765G SoC, have 8GB of RAM, Bluetooth v5.1, support 33W fast charging, and run on Android 10.

It should be noted that Vivo has not shared any information on the existence of the Vivo X60s as of yet. The company launched the Vivo X50 series in India earlier this month which brought the Vivo X50 and the Vivo X50 Pro.