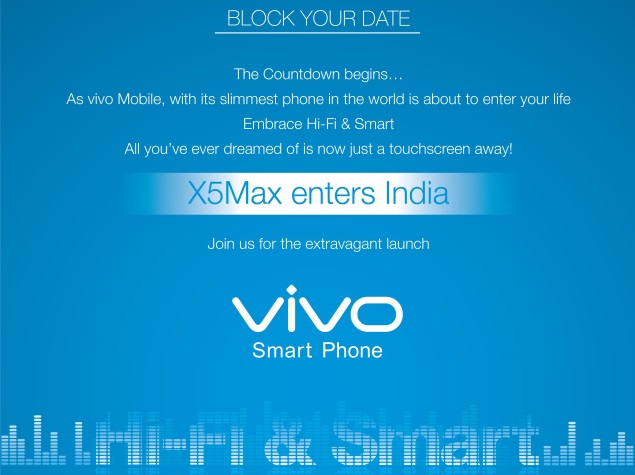 Vivo, a Chinese smartphone brand, started sending invites for an event scheduled on December 15, where it is expected to launch the "slimmest" smartphone, the as-yet-unannounced Vivo X5Max in India. Additionally, the Chinese company is said to tie up with Viacom 18 Media to market its 4G handsets in India.

The company is the following footprints of Xiaomi, which has enjoyed astonishing sales in the country, with the preparation to introduce its first device in the country. As of now, details about the Vivo X5Max's innards or pricing are unknown.

The Vivo X5Max handset was reportedly certified in China recently and was claimed to sport a thickness of 4.75mm. Notably, Oppo's R5 smartphone at just 4.85mm thickness is currently claimed to be the 'slimmest smartphone in the world', surpassing the Gionee Elife S5.1, which is 5.1mm thick.

Financial Express citing company officials reports that Viacom and Vivo have tied up to assist the Chinese handset company as a mobile brand in the country.

The report however speculates that the deal is "a possible move by RJio to bundle 4G mobile and services, and make it available through its platform once it starts its 4G operations in India."

Further, Vivo Mobile India Director, Jacy Liao told FE, "We have plans to be part of the new government's Make in India campaign. We would set-up our own manufacturing facility in India the in next three years."

Interestingly, Xiaomi, Vivo's another Chinese counterpart, has also revealed plans to begin production in the country - likely within two years.