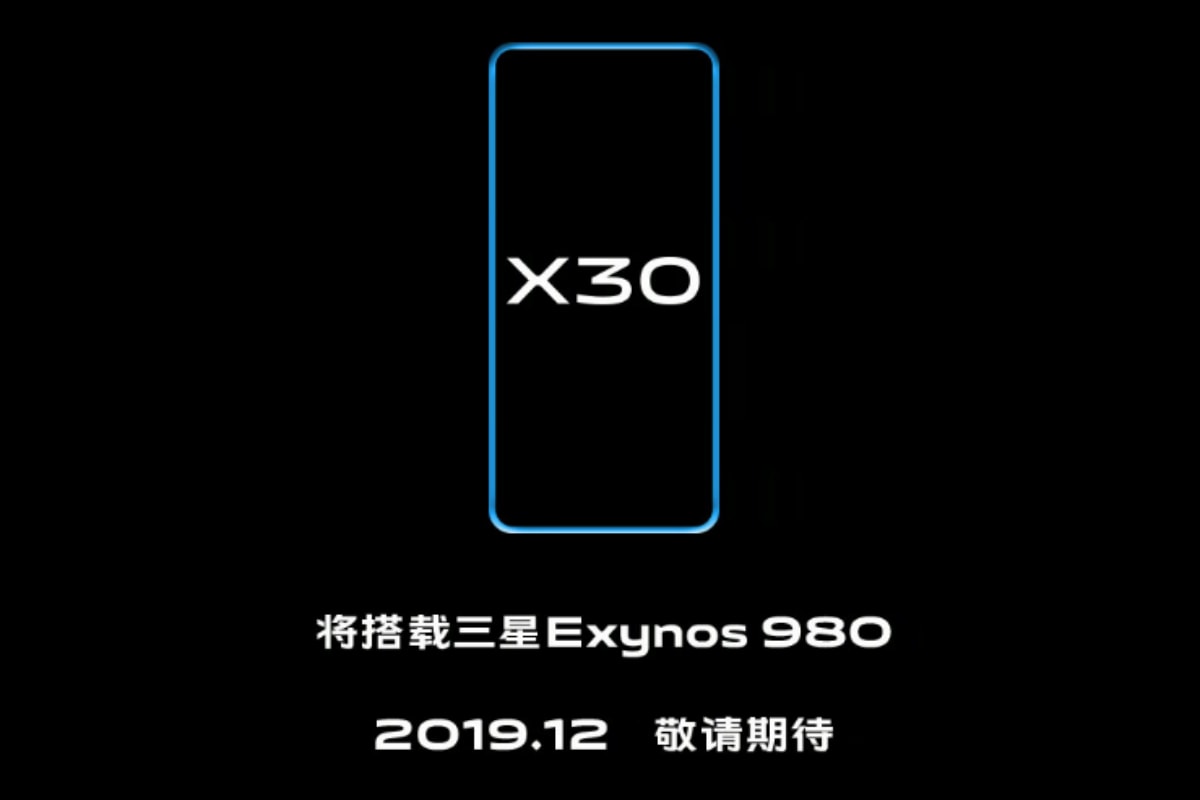 Vivo X30 will be powered Exynos 980 SoC, the company announced at its event in Beijing on Thursday

Vivo X30 is set to officially launch in December, the Chinese company announced at a press briefing in Beijing on Thursday. The smartphone will come with dual-mode 5G support and feature Samsung's Exynos 980 SoC. The South Korean giant unveiled the new octa-core chipset with an integrated 5G modem and on-device artificial intelligence (AI) processing support back in September. The Exynos SoC also includes two cores of ARM Cortex-A77 cores in addition to six power-efficient Cortex-A55 cores to deliver optimal performance. If we believe the rumour-mill, Vivo could bring the X30 alongside the X30 Pro as two of its 5G phones in 2020.

At the press event, Vivo elaborated the performance of the Exynos 980 SoC in collaboration with Samsung. The company, as per the posts available on its Weibo account, highlighted advanced connectivity on the new Exynos SoC with 5G as well as Wi-Fi 6 support.

The presence of the dedicated 5G modem enables the Exynos 980 SoC to deliver up to 3.55Gbps of download speeds, Vivo and Samsung claimed at the event. The Cortex-A77 CPU cores on the new SoC are also touted to deliver 20 percent performance increase over what's available through the Cortex-A76 cores.

Samsung didn't announce any of its particular smartphone models that will feature Exynos 980 SoC at the time of its formal announcement in September. Nevertheless, Vivo announced at the joint event that it would bring the X30 with the new Exynos SoC next month.

The Exynos 980 SoC supports up to 108-megapixel primary sensor on a camera setup that can have up to five sensors. Also, it comes equipped with a Mali G76 GPU.

Vivo is yet to provide further details of the X30. However, a recent tip by a source on Weibo leaked its price and specifications.

The Vivo X30 is rumoured to sport a 6.5-inch AMOLED display with 90Hz refresh rate and include 8GB RAM as well as up to 256GB of onboard storage. Further, the phone could include a quad rear camera setup, including a 64-megapixel primary sensor as well as 13-megapixel secondary sensor, 8-megapixel tertiary sensor, and a 2-megapixel depth sensor.

Unlike the Vivo X30, the Vivo X30 Pro would have a 6.89-inch AMOLED display with 90Hz refresh rate. The smartphone is also rumoured to include up to 12GB RAM and up to 256GB storage. Additionally, the Vivo X30 Pro is said to have a triple rear camera setup with a 60-megapixel primary sensor and include a 4,500mAh battery with 44W flash charge support.